Jatiya Party Chairman HM Ershad on Friday demanded capital punishment for those who are attacking religions and religious beliefs saying that the attackers of minority communities must be identified as the enemies of Islam and the country.
“They who are launching attacks on minority communities, looting their property, setting fire to their places of worship should be identified as the enemies of Islam…there should be a provision of death penalty for those attacking other’s religion and religious belief,” he said.
In a statement, the Jatiya Party chief said the helpless minority communities are becoming the victims of the ongoing political conflict between the two groups in the country. “We’ll never accept that the helpless minority communities will become the victims of political confrontations.”
Identifying the country’s minority communities as ‘Amanat’ (wealth kept for safety) Ershad said it is the religious responsibility of all to save their lives and property and protect their places of worship. “I urge all the Muslims to perform their duties accordingly.”
The Jatiya Party chairman Ershad urged the government to rebuild the houses, religious establishments, business houses and property and ensure double compensation for the victims.
He also urged the government to arrest the attackers and give them exemplary punishment and ensure necessary security for the minority communities.
Expressing concern over the recent violence, the former President said a sense of insecurity has engulfed the minorities across the country.
“It has been carried out in a planned way to destroy the religious harmony and stigmatise the country,” he said reiterating that the attackers are the enemies of Islam and the country and they will have to be handled with an iron-hand. UNB 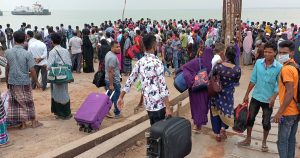