Bangladesh’s remarkable progress in achieving a number of the Millennium Development Goals (MDGs), including the reduction of poverty, primary school enrolment and maternal health, could be the foundation for an exceptional performance across all indicators by 2015, speakers said at an MDG roundtable on Thursday.Underscoring the need for a final thrust in attaining the eight agreed goals of the MDGs, Bangladesh’s leading development academics and practitioners said the country is considered a poster-child in terms of MDG progress, but now needs focused attention to address bottlenecks that are hindering further attainments.
UNDP in partnership with the General Economics Division of the Bangladesh Planning Commission held the roundtable as part of a global MDG Momentum campaign this week that marks 1,000 days left till the 2015 deadline, said a UNDP press release.
Speaking at the event Elena Tischenko, South and West Asia Division Chief, UNDP said, “It’s time to internalise the MDG’s while also looking beyond them in 2015.”
She said, “Before the MDGs there were a series of national conferences in places such as Rome, Paris and Cairo, but the problem was that they discussed and decided on one issue at a time and were not binding. The MDGs brought them all together and provided for the first time in history a global roadmap for the collective future of the world.”
This led to most successful poverty drive ever and while great developmental strides have been taken around the world and in Bangladesh problems still remain.
Dr Shamsul Alam, Member GED, said, “Bangladesh has performed remarkably well in a number of MDGs but the issue is that we have not been consistent in all the indicators. While we have done well in net enrollment in primary education, which falls under MDG 1, another indicator under MDG 1, the adult literacy rate needs more attention.”
Dr Qazi Kholiquzzaman Ahmad, Chairman of Palli Karma-Sahayak Foundation (PKSF) and moderator of the roundtable, felt that health-related goals needed to put at the forefront of the next 1000 days.
Dr Ahsan Mansur, Executive Director, Policy Research Institute also felt the need for Bangladesh to pivot towards increased health and nutrition for the next 1000 days. While Faustina Pereira, Director, Human Rights and Legal Aid Services said removing bottlenecks to women’s participation in the development process should be of prime importance for the next 1000 days and beyond.
UNDP, Country Diretor, Pauline Tamesis, stressed the need for looking at the environmental goals set by the MDGs as Bangladesh has stagnated in the achievement of those goals.
She also went on, “Gender inequities, particularly in terms of violence against women, but also in the high dropout rate for girls in the school system remains a major challenge.”
And while poverty is declining fast, it is also a cause for concern that malnutrition is not. Even as families emerge out of income poverty, higher disposable income is not translating into better nutrition.”
Tamesis continued and said that despite outstanding results in number of areas, more concerted work was needed to push Bangladesh from good to great.
Rasheda K Chowdhury, Executive Director of Campaign for Popular Education (CAMPE) said, “When looking forward to the next 1000 days of action I would like us (Bangladesh) to be more ambitious about some of the goals we are on track to achieve or have already achieved. There is no doubt our school dropout rate has decreased, but we need to set more ambitious goals about dropout rates.”
She also said, “The next 1000 days should give special emphasis on the youth and that we should look into specific targets about how we move children from education to the working world.”
The roundtable included two presentations by UNDP Assistant Country Director, KAM Morshed and Eakub Ali, Joint Chief GED.
They presented on reflections on Bangladesh’s MDG progress so far and the post-2015 development agenda respectively. UNB 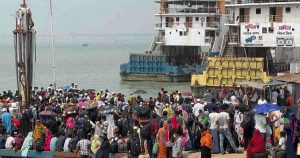