Chief Election Commissioner Kazi Rakibuddin Ahmed says legal measures are afoot against the Jamaat-e-Islami after a review of its organisational charter.

“We will review their constitution and find out violations, if any. Our action has to be legal,” Ahmed said during a press briefing at the Election Commission Thursday. “The whole country is eagerly watching the situation.”

But, he said, cancelling the registration of the Islamist party would be a ‘lengthy process’ unless the government chose to ban the Jamaat-e-Islami.

“But to cancel the registration staying within the law of the land will involve a very long procedure,” he warned.

In its first verdict, the second war crimes tribunal of Bangladesh had observed that the Jamaat-e-Islami had substantially contributed to the formation of auxiliary forces during the 1971 Liberation War to help the Pakistani army.

In its second verdict, the tribunal elaborated further on the Islamist party’s complicity in mobilising auxiliary forces during the Liberation War.

Awami League Presidium member Abdul Latif Siddiqui has already indicated that the current government is planning to place a bill in the parliament seeking a ban on the Jamaat-e-Islami in deference to the spirit of the Shahbagh protests.

When asked about the Jamaat’s role in opposing the country’s independence in 1971, the Chief Election Commissioner said he would work within the limits of law. “If I get an order from the court, I will have to implement it. Everyone has to obey the orders of the court.”

He said the legal cell of the Election Commission was reviewing the amended charter of the Jamaat-e-Islami. “A legal review process takes time.”

The CEC’s comments came a year after assuming office.

According to the existing law, a party must be registered if it wants to contest the national polls.

The EC has asked the Islamist party to amend its charter as several of its clauses were conflicting with the Representation of People’s Order (RPO). The Jamaat has allegedly stuck to several clauses objected to despite amending its charter on various occasions.bdnews24.com 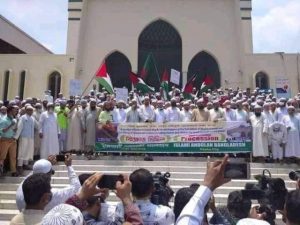