Rob Young, from YALE Environment360
Next week, the U.S. Congress is expected to vote on the bulk of $60 billion in emergency spending to provide for recovery from Hurricane Sandy. Clearly, significant aid is needed to repair the damage left by the storm and to help many people put their lives back together. But the bill before Congress includes provisions authorizing spending that would be fiscally irresponsible and environmentally damaging and would set a very bad precedent as we plan for long-term adaptation to rising sea levels and climate change.
The bill goes far beyond the immediate need for emergency assistance by funding a massive coastal engineering effort that is not based on science or wise planning. As currently proposed, the bill would give the U. S. Army Corps of Engineers roughly $4.5 billion to spend on coastal construction projects related to “flood control and risk reduction.” Most troubling, the bill requires the Corps to attempt to rebuild the New Jersey and New York beaches to their “design profile.” In other words, the Corps will work to put the beaches back exactly as they were before the storm, ignoring the reality of rising sea levels and intensifying storms as the world warms.
This is not emergency disaster relief. It is the development of coastal policy. And that ill-advised policy is this: We will try to hold the precarious shoreline in place and protect property and infrastructure with a major  investment of taxpayer dollars in coastal engineering. The money should be spent on long-term solutions such as buying out owners of high-risk properties.
What’s worse, the Corps need only determine that a project is “cost effective.” Projects do not need to have been previously authorized or reviewed, and environmental impacts need not be addressed. The Sandy bill even authorizes the Corps to spend, without environmental review, roughly $1 billion “to address damages from previous natural disasters” unrelated to Hurricane Sandy.
(Source: Environmental News Network. Hurricane Sandy damage photo via Shutterstock) 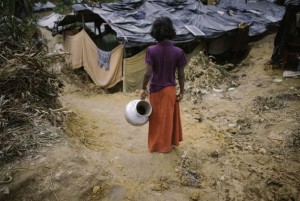 Why Water & Sanitation Systems are Vital for the Economy