The BNP on Friday refuted claims that its Chairperson Khaleda Zia’s calling international attention for ‘reinstating democracy in Bangladesh’ was an act of ‘sedition’.

Khaleda wrote in the ‘Washington Times’ opinion column dated Jan 30, under the title “Zia: The thankless role in saving democracy in Bangladesh”, which drew scathing criticism at parliament on Thursday night.

“She (Khaleda) had called attention of the United States and all other well-wishers of Bangladesh. It was not to protect BNP … it was to guard democracy in the country,” said BNP Standing Committee member Moudud Ahmed Friday morning.

In the article, Khaleda wrote of her fears of Bangladesh going towards a one-family dictatorship. The ruling MPs maintained that she had committed a ‘crime’ that was tantamount to sedition as ‘she called for foreign intervention’.

Pro-Awami League MPs also asked Khaleda to apologise to the country for her column.

Moudud was speaking at a protest rally Friday morning at party headquarters in Naya Paltan. He said the column had ‘hurt’ the government. “Their criticisms prove that the BNP Chairperson spoke the truth.”

He said, “There is no democracy in Bangladesh today. The government is top to bottom deep into corruption.”

Moudud recalled Sheikh Hasina’s alleged efforts against the BNP during 1991-1996 and 2001-2006. “Then your leader (Sheikh Hasina) had criticised the BNP government in the US, England, France and several other countries. She had gone to France and pleaded to raise a bill against Bangladesh government. Did you forget?”

“Not only that… she (Hasina) had even visited the US and urged to stop assisting Bangladesh. She went to Florida and said Bangladesh was a failed nation,” he added.

The BNP leader alleged that the government had tainted Bangladesh with its corruption in the Padma bridge project. “The government is pushing the country towards violence and anarchy … they are trying to destroy the opposition.”

The BNP Chairperson had a two-hour late night meeting with the US Ambassador to Dhaka, Dan W Mozena, on Jan 16. Her Press Secretary said the meeting discussed ‘bilateral interests’.

Earlier, US State Department’s Bangladesh Desk in-charge Benjamin Barry, in a meeting with Awami League representatives in New York, admitted to efforts being made by Mozena to resolve the political deadlock in Bangladesh.

He had affirmed that there was no alternative to democracy for Bangladesh and that the US would not accept anything else.bdnews24.com 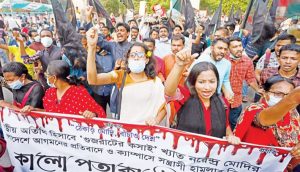