Expatriates’ Welfare and Overseas Employment Minister Khandaker Mosharraf Hossain on Tuesday said the decision to send workers to Malaysia on a government-to-government (G to G) arrangement cannot be a matter of confrontation between the government and the private recruiting agencies. “Out of the 156 countries, we’re sending workers to only one country under the G to G arrangement. There’s no obstacle for them towards sending workers to other countries,” the minister said.
The minister was talking to reporters at Prabashi Kalyan Bhaban as he was asked about the suspension of activities by Bangladesh Association of International Recruiting Agencies (Baira) over the last nine days.
On April 7, Baira suspended its activities in protest against government measures that they claimed would affect the foreign labour market.
Noting that the government is determined to keep the migration cost below Tk 40,000 per worker, Mosharraf said if the private recruiting agencies can remain close to that amount they will certainly get the go-ahead from the government.
Asked whether the suspension of activities by Baira will affect the labour migration sector, he said, “They (Baira) are not a sector. It’s not them who export the manpower. They only work as agents of the government in the labour sending process.”
The abstention of Baira may create some problems in the beginning, but it will have no significant impact in the long run, he added. About the draft of the Overseas Employment and Migrant Workers Act 2013, which the cabinet approved in principle at a meeting on Monday, he said, “The law is aimed at ensuring dignity of migration by giving legal protection to workers.”
The law has been drafted with an aim to ensure safe migration and return of migrant workers, to ensure the welfare and rights of migrant workers, he added.
Earlier, at a meeting with a delegation of Dhaka Chamber of Commerce and Industry (DCCI), the minister said, “The government is gradually moving towards G to G arrangements for sending workers abroad to ensure the dignity of migration.”
“We’ve not been able to control the actual cost of migration despite vigorous attempts… it’s the irregular migration that affected the labour market most,” he said. UNB 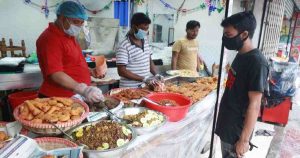