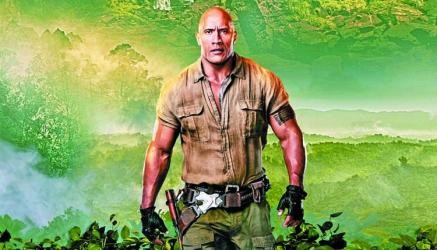 Hollywood star Dwayne Johnson, who was forced to cut short filming for the ‘Jumanji: Welcome to the Jungle’ sequel. After suffering from fluid in his lungs, has now returned to the sets.

The Rampage star, also known as The Rock, has been busy shooting scenes for the action-adventure follow-up, but for the first time in his career, he was unable to push through his illness to stay on schedule, and had to end his work day early to get some much-needed rest, reports aceshowbiz.com.

“Got my a** kicked yesterday when I woke up with a fever,” he wrote in a post on Instagram on March 22. He added: “Saw my doctor who observed I had fluid in my lungs. Fun.

So sick I couldn’t finish the job. Drive home miserable.” Johnson shared the news alongside a photograph of his “magic potion” – antibiotics and vitamin supplements, but then revealed he was already on the mend, and was returning to the ‘Jumanji’ set to continue shooting, reports Agencies.