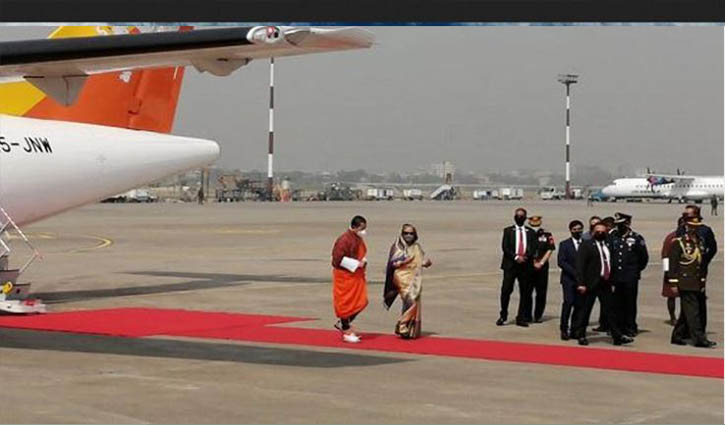 Dhaka, Mar 23: Bhutanese Premier Dr Lotay Tshering arrived in Dhaka Tuesday to a red carpet welcome by Bangladesh Prime Minister Sheikh Hasina, who drove to the airport to greet the visiting leader in a departure from protocol.The Bhutanese PM is the fourth among world leaders to arrive in Dhaka on a three-day official visit to attend the golden jubilee celebrations of Bangladesh’s independence and the birth centenary of Bangabandhu Sheikh Mujibur Rahman.
A VVIP aircraft of Bhutan’s national carrier Druk Air carrying Prime Minister Tshering and other entourage members landed at Hazrat Shahjalal International Airport (HISA) around 9.30am.
Prime Minister Hasina welcomed her Bhutanese counterpart at the VVIP tarmac of the airport with a flower bouquet. The visiting leader was subsequently given a tri-services guard of honour at the airport.
Several Ministers, State Ministers, and high-ranking civil and military high officials were also present at the airport.
From the airport, the visiting Bhutanese PM headed to the National Memorial in Savar to pay tributes to the martyrs of the Liberation War of Bangladesh.
At the National Memorial, Tshering signed the visitors’ book and planted a sapling next to the one he planted on April 12, 2019.
He is also slated to visit Bangabandhu Memorial Museum at Dhanmondi no 32 to pay tributes to the Father of the nation. A visit to BIMSTEC Secretary General’s residence for a meeting is also on his itinerary.
Foreign Minister Dr AK Abdul Momen will call on him at the Presidential Suite in the hotel.
In the evening, the Bhutanese PM will attend a cultural programme and a banquet hosted by Prime Minister Hasina in his honor.
On Wednesday, Lotay Tshering is scheduled to meet Prime Minister Hasina at the Prime Minister’s Office (PMO), where both the leaders are slated to hold talks.
After the talks, a couple of MOUs are likely to be signed between Bangladesh and Bhutan to enhance the cooperation between the two countries.
The Bhutanese Prime Minister will also pay a courtesy call on Bangladesh President Abdul Hamid at Bangabhaban.
Later in the afternoon on Wednesday, Tshering will join the celebrations at National Parade Square as the guest of honour, where Prime Minister Hasina will receive him, reports UNB.