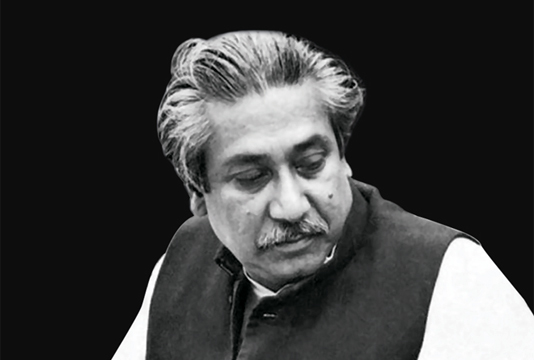 The birth centenary of Bangabandhu Sheikh Mujibur Rahman is being celebrated all over Bangladesh. A 10-day programme beginning on 17 March has been taken up. It will end with the celebration of the Golden Jubilee of Bangladesh’s Independence on March 26. The architect of independent Bangladesh and the Father of the Nation did dedicate his entire political career to champion the cause of Bangalees and led them to achieve freedom through the glorious War of Liberation of 1971. In his long mission for the liberation of the people of Bangladesh, Bangabandhu charted a very calculative path of struggle. The historic 6-point programme announced after the 1965 India-Pakistan War was the turning point that showed the people the dream of self-determination. The military rulers who exploited the people of Bangladesh since the creation of the state of Pakistan got the signal and tried to silence him by starting the Agartala Conspiracy Case. The people’s movement of 1968 that it fomented and the mass upsurge of the following year however brought Bangabandhu to the centre stage of politics turning him into the undisputed leader of the people of this land.
The landslide victory of the Awami League in the 1970 general election under the leadership of Bangabandhu gave him the mandate and his mission a decisive shape. But despite all provocations, Bangabandhu took his time, prepared the people for the armed struggle as the Pak military leaders conspired to undo the election outcome. Bangabandhu joined talks that exposed the tricks of the military to prepare for an assault. Finally, the ‘Operation Search Light’ launched against the unarmed people of Bangladesh forced the war on them. Bangabandhu’s strategy paid off and by then the people were ready for the war that cost us a sea of blood. On this auspicious occasion of birth centenary, we once again salute Bangabandhu for his dedicated, uncompromising, calculated and successful leadership and struggle that resulted in the creation of today’s independent and sovereign Bangladesh.