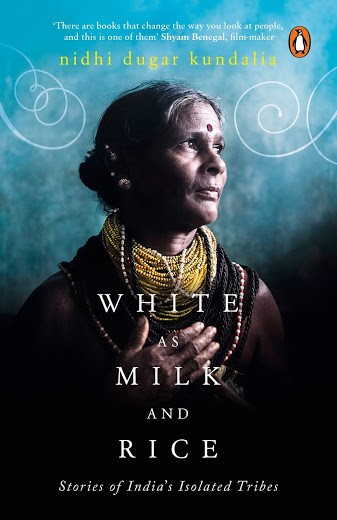 Sudhirendar Sharma
An uncommon narrative on the tribes’ emotional conflict with changing reality
Presenting the lives of the members of six tribes with exquisite specificity and empathy, White as Milk and Rice places the discerning reader amid the Halakkis, Kanjars, Kurumbas, Marias, Khasis and the Konyaks. While some of these tribes are marginalized, none of them seems to be complaining, which makes you wonder if there is anything amiss in the way you have been looking at them, and by extension, at the world. Living within their traditional beliefs and distanced from supposedly “civilized society”, these tribes are oblivious of their anthropological worth. With her ear firmly to the ground, the author Nidhi Dugar Kundalia constructs an uncommon narrative about their emotional conflict with changing reality. Today, these tribes continue to wage a silent battle for existence within their isolated pockets. In doing so, they pose existential questions: should tribes negotiate with a world that pays them no attention? Why have they not been allowed to develop along the lines of their own genius? White as Milk and Rice provides an insight into lives that an urbanite might consider less modern but can’t help but admire. This is especially so with those aspects of tribal lifestyles reflective of an organic bond with nature.

The book provides some excellent vignettes: not allowed to integrate with mainstream society, the Kanjars have persisted with their criminal lifestyle; holding sexual freedom valuable before marriage, the Marias have retained their dedicated space for conjugal experimentation; and, despite the pressures of a matrilineal society, Khasi women feel empowered by their traditional inheritance. Each story has sub-stories that reveal how livelihoods and lifestyles are negotiated. What comes out clearly is that the colorful lives of those who belong to tribes cannot be painted with one brush stroke. Indeed, their design of development varies even across households within the same tribe.
Kundalia lets characters speak for themselves and allows the reader to experience the complexity of engagements with the otherness of the “other”. You might despise the desire of the Konyak men to display animal heads as trophies of courage and strength, but it must also be known that the traditional practice of displaying human skulls has been done away with. For them, the display is about a sense of belonging and freedom inherent in such cultural practices. These beliefs challenge the reader to take a deep dive into the socio-cultural underpinnings that characterize the imperatives of tribal existence.
White as Milk and Rice is loaded with details about routines and practices. Take the Kurumbas who skillfully gather honey from hives that hang precariously on cliffs. Even while dangling between life and death, the Kurumba boy gently speaks to the hive. “Some for the forest, some for me,” he says treating the hives with almost familial care. Stories like these reflect empathy and make the reader more aware of the lives and thought processes of these people. Some tribes have no future tense in their conversation and rely on what nature has to offer on a daily basis. No wonder most tribal hamlets celebrate the end of each day as a mark of thanksgiving for the day gone by with an innate desire to welcome the next.
At a time when mankind has been pushed into forced seclusion and is plagued by shrinking resources, this book offers heart-warming narratives on connecting with the inner self and with the aspects of nature that remain bountiful.
White as Milk and Rice
by Nidhi Dugar Kundalia
Penguin, New Delhi
Extent: 244, Price: Rs. 399
(Sudhirendar Sharma is a writer on development issues based in New Delhi, India)
First published in The Hindustan Times, on May 20, 2021.