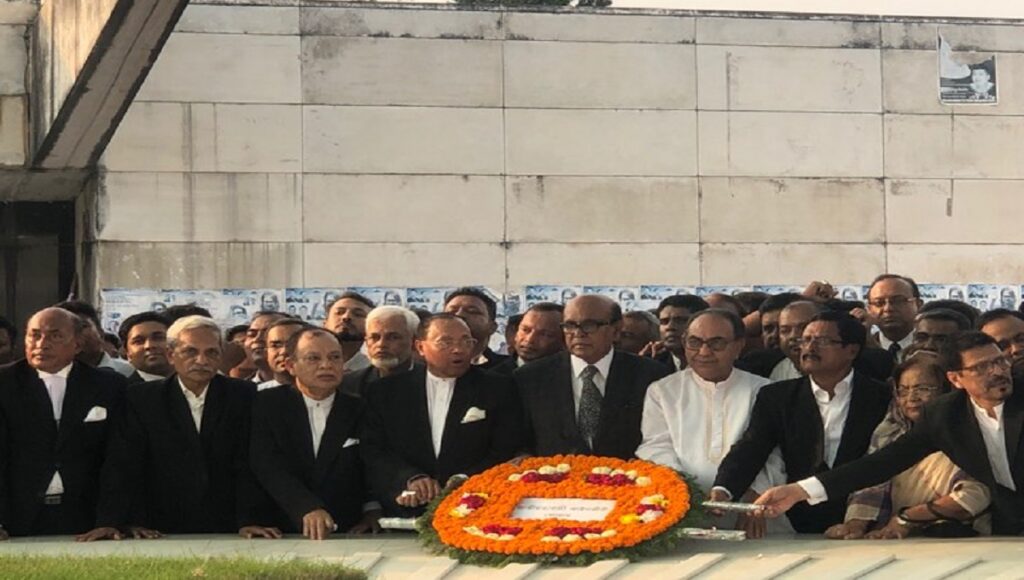 Dhaka, Oct 15 – BNP standing committee member Barrister Moudud Ahmed yesterday said that party Chairperson Khaleda Zia serving will be released through waging tougher movement not on bail.“Khaleda Zia will be released through waging movement on the streets not on parole,” he said while speaking at a mourning meeting protesting the killing of BUET student Abrar Fahad.
He called upon the government to give up the power immediately saying that it would be better as soon as the government leave the power.
“WE will demand of the government to immediately resign from the power and create and opportunity to hold a free and fair election to form a representative government.
The BNP-led 20-party alliance organized the meeting at Jatiya Press Club with BNP standing committee member Goyeshwar Chandra Roy in the chair.
Barrister Moudud argued that the release of Khaleda Zia is essential to restore rule of law, independence of the judiciary, freedom of expression and ensure peaceful living of the people.
The former law minister said he does not believe that the release of former premier is possible only through legal battle and thus there is only way to wage movement to release her by taking to streets.
He thinks once a mass upsurge would be created to force the government to quit.
The BNP leader said the 20-party alliance still remains intact and it would remain in future.
“Side by side, we have to forge a greater unity taking all the people with us and we have to face the situation through waging movement,” he said.
He justified that the anarchism and tender manipulation are going on as there is no transparency and accountability.
Goyeshwar Chandra Roy questioned as to why the former premier would be released on parole.
He said a section of collaborators have been created within the BNP who are lobbying to release Khaleda on parole.
The BNP leader termed the decision to impose ban on student politics suicidal and said the politics of Chhatra League should be banned not student politics.
The meeting was also addressed, among others, by Syed Ehsanul Huda of Bangladesh Jatiya Dal, Mostafa Jalal Mohiuddin of Jatiya Party (Kazi Zafar), Fariduddin Reza of National Peoples Party,Mostafizur Rahman Iran of Labour Party and Prof Golam Porwar and Abdul Halim of Jamaat.
Meanwhile, Jatiyatabadi Ainjibi Forum Convener Advocate Khandker Mahbub Hossain on Tuesday said pro-BNP lawyers will be there on the streets with politicians until the fall of the current government is ensured.
“People and lawyers have awakened. We’ll surely free Khaleda Zia through a strong agitation. We’ve taken a vow that we’ll remain in the field with politicians until an election is held under a neutral government and until the current regime’s fall is ensured,” he said.
Mahbub, also a BNP vice-chairman, came up with the remarks while talking to reporters after placing wreaths at party founder Ziaur Rahman’s grave together with leaders of the newly formed convening committee of Jatiyatabadi Ainjibi Forum.
He demanded the government release all the arrested political leaders, including BNP Chairperson Khaleda Zia.
The BNP leader alleged that Bangladesh has now turned into a den of corruption, killing, rape and enforced disappearance due to the ‘misrule’ of the current government.
“Who have set up casinos and who have given them shelter? You won’t be able to save big fish by arresting some corrupt elements. We’ll put all the corrupt people on trial,” he warned.
BNP standing committee members Moudud Ahmed, Mirza Abbas, Selima Rahman, and vice-chairmen Netai Roy Chowdhury and Mir Mohammad Nasir were, among others, present. – Staff Reporter