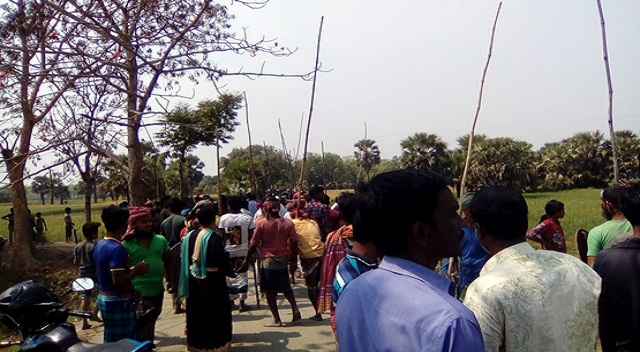 Faridpur, Apr 7:  Eight men have been arrested and some 3,000-4,000 people booked in connection with the violent clashes between police and locals in Saltha Upazila of Faridpur district on the first day of lockdown, officials said Wednesday. Monday’s clashes left one youth dead and at least 20, including eight cops, injured.

“A case was filed against 3,000-4,000 people at the Saltha Police Station on Tuesday night, on a complaint by sub-inspector Mizanur Rahman. Of those booked, 88 people have been identified and eight arrested so far,” said officer-in-charge Md Ashikuzzaman.
According to Md Alimuzzaman, police superintendent of Faridpur, a mob attacked several government offices and houses of government officials on Monday, following rumours of some deaths in police firing and assault on two maulanas by cops.
Few offices and houses of government officials were also set on fire by locals during the mayhem that continued from 8 pm to 11 pm on Monday night, the SP said.
The Upazila Parishad building, the residence of Upazila Nirbahi Officer (UNO), the local police station, the office of the Assistant Commissioner (land) and the sub-registry office were all vandalised by the mob, the SP said.
Vehicles of Saltha UNO and the AC (land) were also torched by the mob, said Upazila Parishad Chairman Wadud Matabbar.
It all happened when a team led by AC (land) Marufa Sultana Khan Hiramoni went to Saltha on Monday to ensure a smooth lockdown in every corner of the upazila, said UNO Hasib Sarkar.
Seeing a gathering of people at a spot, Marufa Sultana returned to her office and sent a team of police there.
When the cops reached the spot, an altercation ensued but it soon turned violent when the locals attacked sub-inspector Mizanur Rahman, the UNO said.
“Subsequently, violent clashes broke out across the upazila between local people and the cops in the wake of rumours that some people died in police firing and two maulanas had been assaulted at the police station after their arrests,” he said.
The UNO said that police have been trying to identify all the attackers from a video footage of the clashes. “A huge police force has been deployed in the area”, reports UNB.