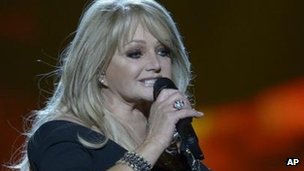 The Swedish city of Malmo is gearing up to host the Eurovision Song Contest final with 26 countries set to perform for millions of TV viewers.Denmark’s Emmelie de Forest is the favourite to win with Only Teardrops.
Singer Bonnie Tyler will make her Eurovision debut on Saturday when she performs UK entry Believe In Me.
Tyler, best known for her 1983 hit Total Eclipse of the Heart, claims she has “a fighting chance” of becoming the first British winner in 16 years.
But bookmakers William Hill revealed her current odds stand at 50/1.
Denmark has odds of 4/6 to win the contest, with its closest competition coming from Norway and Ukraine.
“Emmelie looks very hard to beat and she could spark the biggest payout in the Eurovision’s long and distinguished history,” said William Hill spokesman Rupert Adams.
“Normally we see a patriotic punt on the Eurovision, but it looks like the public have given up on our chances and Bonnie is simply friendless,” he added.
Welsh star Tyler, 61, will perform in 15th place, midway through the show – giving her a clear advantage over Engelbert Humperdinck, who opened the contest last year in Azerbaijan, and ultimately finished in penultimate place.
“I’m lucky with my fans, they’re very loyal to me,” she told the BBC. “They all reckon they’re going to vote, so I hope they’re going to – I think it will help boost my chances.”
But she added: “I’m not counting my chickens. I hope I will have a respectable score but if I don’t, I’ve been in this business too long to take it personally.”
Newcomer Ryan Dolan performs Ireland’s entry, Only Love Survives, in the coveted final slot, after qualifying from the semi-finals in Malmo earlier in the week.
Britain is one of the “big five” countries along with Germany, France, Spain and Italy, which automatically qualify for the final.
The remaining 21 spots were filled by the highest scoring countries from two semi-final heats held this week.
A number of countries have withdrawn from the competition citing financial woes. Bosnia-Hercegovina, Portugal and Slovakia pulled out over money, while Turkey withdrew after complaining about the automatic inclusion of the big five.
(BBC Entertainment and Art)