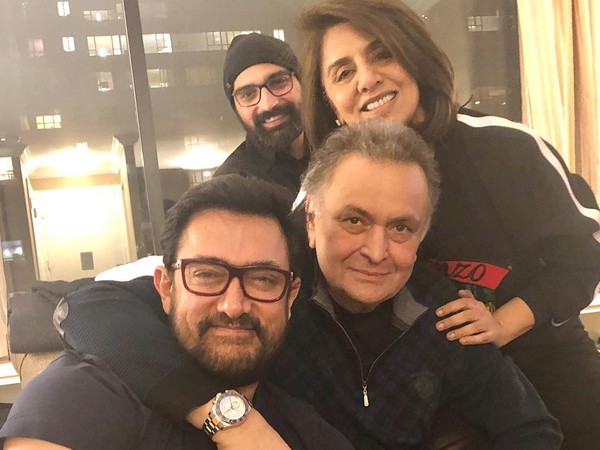 Bollywood veteran Rishi Kapoor who is undergoing medical treatment in New York was recently joined by Aamir Khan. Sharing a picture from the day, Neetu Kapoor wrote, “It’s not how many hours one spends with a person it’s how much u give in that time !!! Aamir gave so much n more Love Respect Warmth Laughter !! He is a true superstar.”
Rishi Kapoor moved to the U.S. in September last year with wife Neetu Kapoor. The 66-year-old actor is there for medical treatment but exact details about his treatment have not been disclosed by the family. Rishi Kapoor has been worked with Aamir Khan in 2006 film Fanaa which turned out to be a great hit and was loved by the audience.
Before Aamir Khan, Bollywood celebrities Priyanka Chopra, Sonali Bendre, Anupam Kher amongst others have visited the actor. Talking about his health condition in a recent interview, Rishi Kapoor told an entertainment portal, “My treatment is on, hopefully, I will recover soon and God willing I will return. The procedure is long and tedious and one needs immense patience which unfortunately is not one of my virtue.”
It was in December last year when Ranbir Kapoor along with his girlfriend Alia Bhatt went to New York to spend time with his parents, reports agencies.