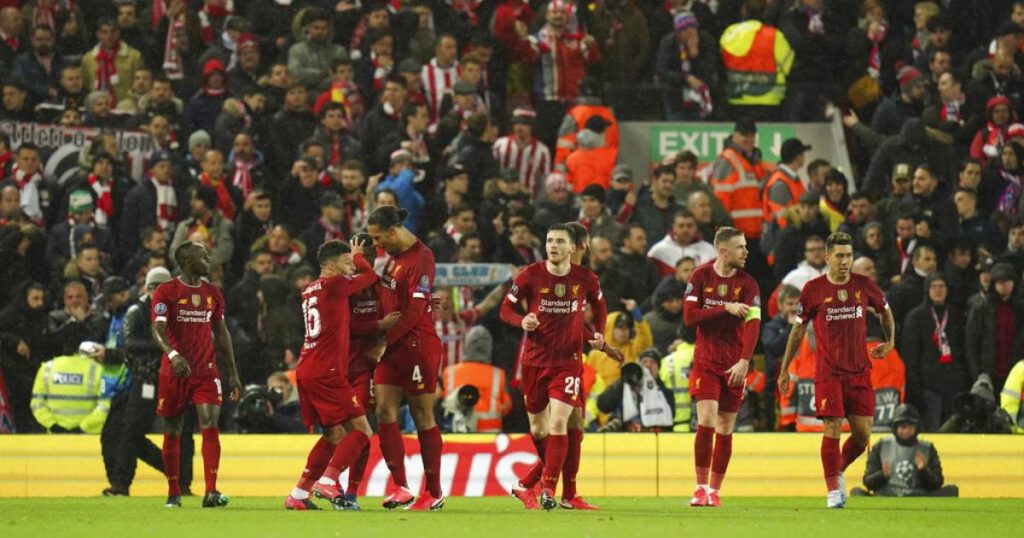 Liverpool  (AP/UNB) — Anfield was rocking. Jurgen Klopp was beating his chest and punching the air. Another famous comeback was on for Liverpool in the Champions League.

One error from their backup goalkeeper saw it all come crashing down for the titleholders on Wednesday.When Adrian received the ball at his feet seven minutes into extra time, Liverpool had just gone 2-0 ahead on the night and 2-1 up on aggregate against Atletico Madrid in the round of 16. The Reds just needed to keep their composure to see the game through.

Instead, Adrian sidefooted a poor clearance along the ground and straight to Joao Felix, who set up substitute Marcos Llorente to score the crucial away goal that put Liverpool on the back foot for the first time in the second leg.

Further goals from Llorente and Alvaro Morata — two former Real Madrid players — secured a 3-2 win for Atletico and a 4-2 win on aggregate.

“Conceding a goal is part of football and shouldn’t have a massive influence,” Klopp said of Adrian’s error. “But, in this moment, the momentum changed.”

The contrast in goalkeepers couldn’t have been starker at Anfield.

While Adrian — filling in for injured Brazil international Alisson Becker — proved to be the fall guy for Liverpool, Jan Oblak again showed why he is regarded as one of the world’s top ‘keepers by producing a series of great saves and blocks to take the game to extra time.

“(Lionel) Messi can win games for you up front,” Atletico coach Diego Simeone said through a translator, referring to Barcelona’s prolific forward, “but goalkeepers can also win games for you as well. Oblak did that for us.”

When Morata sealed progress for Atletico with the team’s third goal in stoppage time of extra time, Simeone sprinted down the touchline, spread his arms out wide, and stuck out his chest in front of the celebrating visiting supporters.

His team, languishing in sixth place in La Liga, had just consigned Liverpool to a first loss in a European home game since October 2014 and completed back-to-back victories over a team that has taken the English Premier League by storm this season.

While Liverpool will have to be content with a first English league championship in 30 years – the title could be sealed as early as next week with the Reds 25 points clear – Atletico will continue, somewhat against the odds, its bid for a first Champions League title. It was a runner-up in 2014 and ’16, also under Simeone, and again he will rely on Oblak and the team’s obdurate defense to take Atletico all the way this season.

Klopp didn’t hide his sourness at Atletico’s approach over the two legs.

“I don’t understand, with the quality they have, the football they play,” Klopp said. “They could play proper football but they stand deep and have counterattacks.

“We accept it, of course, but it doesn’t feel right tonight.”

In the other Champions League match on Wednesday, Paris Saint-Germain beat Borussia Dortmund 2-0 to seal a 3-2 victory on aggregate.

The game in Paris was played in an empty stadium because of the virus outbreak that has played havoc with the world’s sporting calendar. But that was not the situation at Anfield, where Atletico fans were allowed to travel despite roughly half of Spain’s coronavirus cases — which have surpassed 2,000 — and two-thirds of the country’s virus deaths occurring in Madrid.

“Put your hands away you (expletive) idiots,” Klopp snapped at some fans wanting a high-five as he walked out of the tunnel to the dugouts before kickoff.

Aside from a couple of men wearing face masks as they walked on the concourse before the match, it felt like business as usual outside Liverpool’s iconic stadium.

Inside, too, as Atletico’s famed defense put in another resilient display until Georginio Wijnaldum’s goal just before halftime that made it 1-1 on aggregate. Alex Oxlade-Chamberlain did his best impersonation of teammate and right back Trent Alexander-Arnold by whipping in a brilliant cross from the byline and Wijnaldum was unmarked as he headed downward and into the far corner.

The second half was spent almost entirely in Atletico’s half and it felt like a matter of when Liverpool would get its second goal as it attacked the Kop end, which was adorned with banners containing phrases like “Jurgener Believers” and “Liverpool, the cream of Europe.”

Andrew Robertson came closest to forcing an aggregate winner when he headed against the crossbar from six yards (meters) out but extra time was needed – though only after a headed goal from Saul Niguez, Atletico’s scorer in the first leg, with the last touch of normal time was ruled out for offside.

Another memorable comeback looked on when Roberto Firmino tucked home a rebound, having initially hit the post with a header from Wijnaldum’s cross, in the 94th for his first goal at Anfield in any competition this season.

But Adrian’s sloppy mistake three minutes later sparked a brilliant recovery of their own from Atletico’s players.

Llorente, in his first season at Atletico after a controversial move from fierce local rival Real Madrid in the offseason last year, scored his second on the counterattack in the 105th minute and Morata, another substitute, clinched victory.

It was Liverpool’s first loss over two legs in Europe under Klopp, and means Liverpool won’t be in a third straight final.