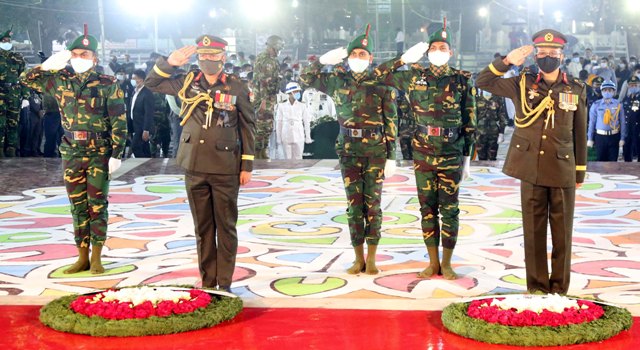 Dhaka, Feb 21 – The nation is observing the Amar Ekushey — the Language Martyrs Day (Shaheed Day) and the International Mother Language Day in a befitting manner on Sunday, marking the supreme sacrifice of the language heroes for upholding the right to speak their mother tongue Bangla. The day is being observed around the world as UNESCO on November 17, 1999 recognised the Ekushey February as the International Mother Language Day.
On behalf of Prime Minister Sheikh Hasina, her Military Secretary Major General Naquib Ahmed Chowdhury paid homage to the martyrs of the Language Movement by placing a wreath at the Central Shaheed Minar in Dhaka at one minute past midnight.
Later, on behalf of Awami League President Sheikh Hasina, the party’s General Secretary Obaidul Quader along with presidium members Matia Chowdhury and Muhammad Faruk Khan, and Joint Secretary Dr Hasan Mahmud and Cultural Affairs Secretary Asim Kumar Ukil another wreath.
Walking barefoot to Dhaka’s Central Shaheed Minar with wreaths and singing ‘Amar bhaiyer rokte rangano Ekushey February’, people from all walks of life paying their respect to the heroes of the Language Movement who sacrificed their lives for achieving the recognition of Bangla as the state language of erstwhile Pakistan.
On February 21, 1952, students and the common people in Dhaka took to the streets in protest against the then Pakistani government’s denial of Bangla as the national language and imposition of Urdu as the only official language of Pakistan.
Salam, Barkat, Rafiq, Jabbar and a few other brave sons of the soil were killed in police firings on this day in 1952 when students came out in a procession from the Dhaka University campus defying section 144 to press home their demand for the recognition of Bangla as a state language of then Pakistan.
Covid-19 health guidelines
The government has requested people to follow the health guidelines outlined by it while placing wreaths at the Central Shaheed Minar due to the Covid-19 situation.
The Cultural Affairs Ministry urged all to maintain the following rules:
Only five representatives from each organisation will be allowed to place wreaths while two people can place wreaths personally. People without mask will not be allowed to enter the Shaheed Minar premises. The authorities concerned should arrange basins and liquid soap at the entrance of the Central Shaheed Minar, it said.
The ministry also asked for the deployment of volunteers to ensure the use of mask and use hand sanitisers.
President’s Message
On the eve of the day, President Abdul Hamid and Prime Minister Sheikh Hasina issued separate messages.
In his message, President Abdul Hamid said it is a unique remembrance in protecting mother tongue as well as own culture and heritage.
“I firmly believe that observing the International Mother Language Day will play a positive role in the development and preservation of our own language as well as building a sustainable future through multilingual education.”
“The spirit of Amar Ekushey is now the constant source of inspiration for the protection of own languages and culture of peoples of different languages in the world. Imbued with the spirit of Amar Ekushey, let the bond of friendship among multilingual people be strengthened, the world’s almost defunct languages be revived and the globe be diversified in respective societies – it’s my expectation on Shaheed Day and International Mother Language Day,” he added.
PM’s Message
In her message, the Prime Minister said: “A particular section of people is found always active in denigrating the contribution of the Father of the Nation in flourishing Bangali identity and establishing the dignity of the Bangla. With the publication of the ‘Unfinished Memoire’ of the Father of the Nation and the Secret Documents of Intelligence Branch of Pakistan, it has been possible to frustrate all such malpractices.”
“Based on a particular spirit, we’ve established the right to language and on the same spirit, we’ve achieved our independence. In the last 12 years, we’ve made tremendous progress in every area of the socio-economic sector of the country, embracing that particular ethos and the logos of the Father of the Nation. Bangladesh is a role model of development in the world today,” she said.
“InshaAllah, soon we’ll establish developed, prosperous and non-communal ‘Golden Bangladesh’ as dreamt by the Father of the Nation.”
The government has taken various programmes to observe the day in a befitting manner.
The day is a public holiday. The day is being also observed in Bangladesh Missions abroad.
National dailies published special supplements and Bangladesh Betar and Bangladesh Television and private radio stations and television channels aired special programmes on the occasion. – UNB