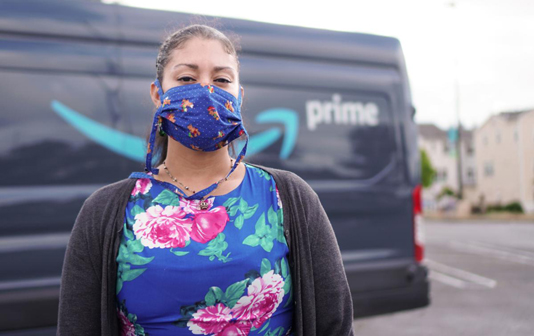 She delivers for Amazon, but Adrienne Williams says the e-commerce and tech giant did not deliver for her.
The 42-year-old California single mother is among the legion of drivers for Amazon’s third-party delivery firms which have been struggling amid surging demand for goods and supplies to locked-down consumers during the pandemic.“We don’t work for Amazon, even though I wear an Amazon uniform, drive an Amazon van into an Amazon warehouse to pick up Amazon packages,” the former junior high school teacher told AFP.
Williams, who stopped working in March when her seven-year-old daughter’s school closed, joined protests in recent weeks calling for better pay and benefits for “gig” workers, or independent contractors.
She said her “delivery service provider” promised to offer health care benefits, but failed to do so.
“They are expected to pay for health benefits, but most of them can’t,” she said.
She added that she was told the Amazon “relief package” for distressed employees and contractors did not apply to her, and later that it does. But she has not received anything.
Amazon says it has some 800 third-party delivery providers globally, but did not provide details on the number of people working for the enterprises.
Amazon last year said it would offer its employees $10,000 to quit their jobs and create their own delivery business for Amazon packages. But Amazon has canceled contracts with some operators that failed to live up to its standards.
“When the virus hits it became apparent how much the DSPs are not financially able to really take care of their businesses the way they should,” Williams said.
She said the services have been struggling and sometimes failing to deal with sanitizing vehicles and training drivers.
On May 1, she joined a protest in front of an Amazon warehouse in Richmond, California, wearing a black mask and holding a sign saying, “I should be able to pay rent if I work full time.”
“COVID just kind of exacerbated the problem and that’s why I’m here,” she said. “Because the safety of my co-workers is important… I’m here trying to fight for that, and hope that we get treated better so that this doesn’t happen again, reports AFP, Pinole, United States.