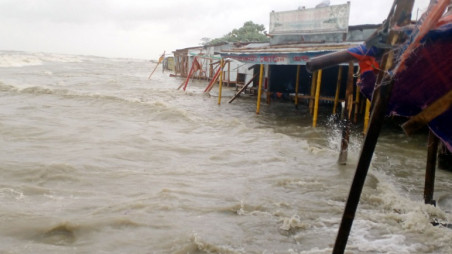 Dhaka, May 21: At least 12 people including children have died in different coastal districts as super cyclone ‘Amphan’ battered the country on Wednesday night, according to government account.Three people also received injuries during the storm, informed Dr Ayesha Akhtar, assistant director of the DGHS, on Thursday.
The deaths were caused by trawler and boat capsize, drowning, tree falling and wall collapse and one died from cardiac arrest.
Eleven of the deceased were identified as Syed Shah Alam, 54, of Kalapara upazila, Rashed, 5, of Galachipa upazila in Patuakhali district, Mohammad Siddique, 72, of Chargfashion upazila Rafiqul Islam, 35, of Borhanuddin upazila in Bhola district, Shahjahan Molla, 55, Gulenur Begum, 70 of Mathbaria upazila and Shah Alam, 50 of Indurkani upazila in Pirojpur district, Rabeya, 13 and Khyanto Begum, 45 of Chowgachha upazila in Jashore district, Nadira Begua, 55 of Sadar upazila in Jhenaidah district and Salauddin, 16, of Sandwip of Chattogram district while the identity of another victim who was killed in Satkhira could not be known immediately.
The injured are from Hizla of Barishal, Galachipa of Patuakhali and Charfasson of Bhola.
Meanwhile, Ministry of Disaster Management and Relief’s National Disaster Response Coordination Center (NDRCC) sources said they could not get any information yet about the extent of damage.
Super cyclone Amphan that formed in the Bay of Bengal hit the country on Wednesday evening and unleashed heavy rainfall and strong wind in the coastal districts.