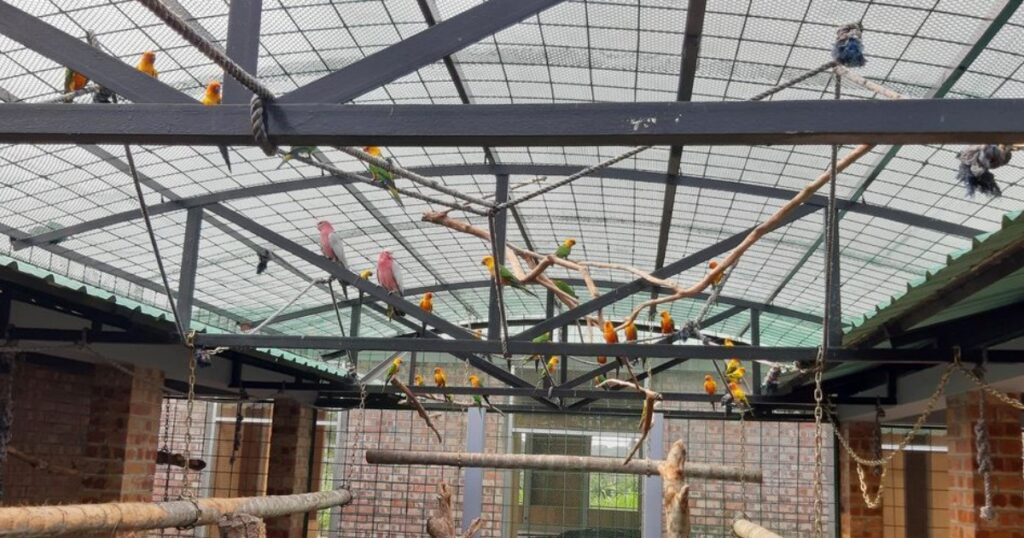 Like other pets, birds also touch people’s lives with a sense of love, wonder and empathy. These often visually attractive creatures are also part of a lucrative trade. Fazlul Karim, a Bagerhat-based industrialist, has set up a commercial breeding farm for domestic and foreign birds named ‘Evergreen Bird Park and Resort’ in Utkul village of Bagerhat Sadar Upazila. The farm has already hatched chicks from the eggs of various species of exotic birds.
According to Fazlul Karim, birds are a big industry and it is possible to even earn huge amounts of foreign currency by exporting exotic birds.
His farm has a wide variety of birds from home and abroad, including the Sulphur-crested cockatoo, Bluegold Macaw, African Gray Parrot, Green-wing Macaw, Nicobar Pigeon, Sun Conure, Jenday Conure and Peacock.
Of all the species of birds, a pair of Sulphur-crested cockatoo costs about Tk 800,000 and a pair of Green-wing macaws costs about Tk 450,000.
This is the first time in Asia that a baby has recently hatched from a Sulfur-crested cockatoo egg on this farm.
Fazlul Karim thinks that the baby hatched from the sulfur cockatoo eggs because his farm has been able to provide a suitable breeding environment for males and females. About half a hundred chicks have hatched from the eggs of eight species of exotic birds in the farm in the meantime.
The farm has a total of 150 birds of 18 species. The farm consists of 12 large sheds, 68 rooms, and 665 cages for sheltering 1,000 birds.
The food list of these birds includes apples, oranges, malta, grapes, mangoes, bananas, wheat, maize, almonds, peanuts, various fruit seeds and a variety of vegetables.
Fazlul Karim set up ‘Evergreen’ in 2013 on 50 bighas of land. He graduated from Khulna BL College with in Bangla Literature.
He told UNB that Bangladesh has a suitable environment for rearing exotic birds. Millions can be earned by producing and selling bird food.
Bagerhat District Animal Resources Officer Md Lutfur Rahman said that there are many rare species of birds in Evergreen farm.
“The farm has been set up here by creating a forest-like environment. Separate nests have been made for each pair of birds to facilitate bird breeding,” Lutfur said.
Lutfur Rahman confirmed that Fazlul Karim has set up the farm with a proper license and many people are thinking of starting similar farms after seeing Evergreen’s example. – UNB