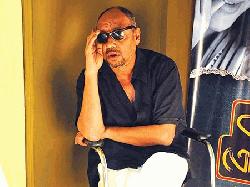 Culture Desk
Widely popular singer, actor and director in Bangladesh and India, Anjan Dutt is going to bring his recent theatre production ‘Salesman-er Shongshar’ in Dhaka in July.
A production of Anjan Dutt Productions, the play will be staged on July 9. Salesman-er Shongshar, an adaptation of Arthur Miller’s famous play ‘Death of a Salesman’, is adapted and directed by Anjan Dutt. Besides, Dutt plays the lead role of Willy Loman in the play. The play was first staged in Kolkata in January to critical acclaim.
Anjan Dutt is an Indian film director, actor, and singer-songwriter- and a professional of the 1991s Bengali music scene defined by alternative music, reminiscent of western folk music. His music is said to be influenced by blues, bluegrass, folk and country music. He is also an accomplished actor, having started his career in Bengali cinema. His first film was Chalachirto directed, by Mrinal Sen, for which he won the prize for the best newcomer actor at the Venice Film Festival. He acted in Aparna Sen’s hit film, Mr. and Mrs. Iyer. In 2018 he featured in Swapnasandhani’s new play Taraye Taraye, as Vincent Van Gogh, under the direction of Kaushik Sen. He is also a national award-winning filmmaker and is one of the most prominent directors of Bengali cinema, directing The Bong Connection, Chalo Let’s Go, and Ranjana Ami Ar Ashbona.
Anjan Dutt was raised in the mountains of North Bengal. He had his schooling from St. Paul’s School in Darjeeling. In the late seventies, he joined a group called Open Theatre and in the early eighties performed plays translated from works of renowned foreign playwrights like Sartre, Peter Weiss, Jean Genet and Bertold Brecht. The group clearly drew inspiration from Nandikar, a highly active and already famous theatre group at that time. Due to politically sensitive content, they faced many obstructions in producing and performing their work, and eventually, the group discontinued its repertoire.
Dutt was first selected in the feature film Chalachitro, directed by renowned filmmaker Mrinal Sen. The film and his performance were critically acclaimed at the Venice Film Festival, but for unknown reasons, it was never released commercially. Dutt said that he was more interested in doing art cinema rather than commercial mainstream cinema. After doing a few art films that were not so commercially successful, including the critically well-received Juganto, scarcity of job opportunities forced him to take up jobs in advertising and later as a journalist for the Kolkata-based daily, The Statesman.