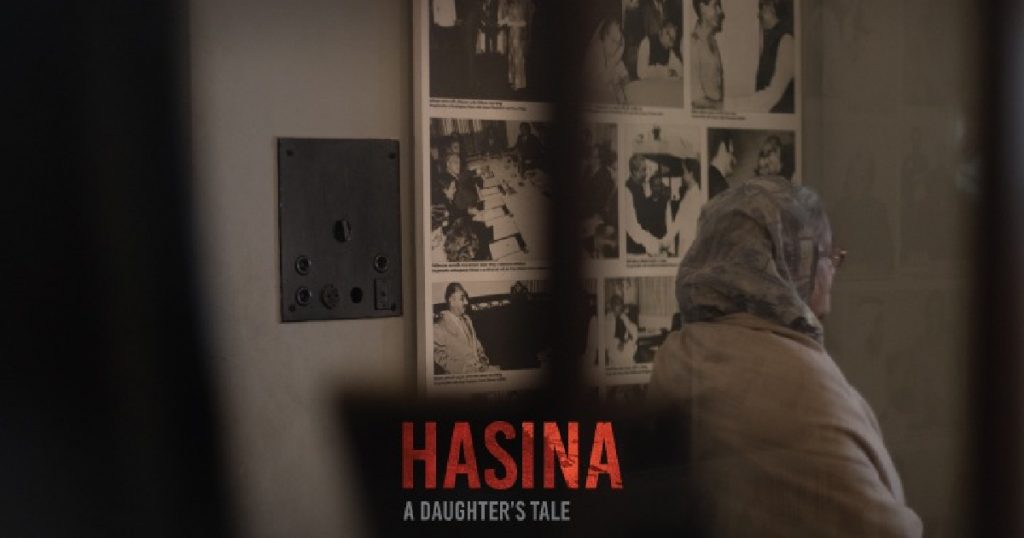 Dhaka, May 16 :  Rewinding the clock 40 years down the line and recreating the homecoming of a survivor of an assassinated family at the end of six years of torturous waiting and her journey onwards is a new breed of visual storytelling “Hasina: A Daughter’s Tale” introduced to the country.With its local and global acclamation garnered due to its dramatic storytelling, the docufiction, shedding light on the less-explored aspects of Prime Minister Sheikh Hasina, has not stopped casting its spell on the audience in past few years and is set to be rescreened on television channels on Monday.
BTV and BTV World will air the visual at 3:30pm marking her homecoming on this day in 1981 – May 17.
Ekattor TV is set to air at 3:30 pm, Somoy TV at 4:40 pm, ATN News at 11:15 pm, and Channel 24 at 5:00 pm on Monday.
Urging the countrymen to watch the film, its co-producer Radwan Mujib, a grandson of the Father of the Nation Bangabandhu Sheikh Mujibur Rahman, wrote on Facebook, “Don’t Miss”, in addition to sharing slots for screening.
While the typical format of narrating history in the country churns out the official and published facts and figures, the docufiction broke that stereotype, portraying all the turns and twists starting from the moment Sheikh Hasina came to know that some disgruntled army officers had gunned down nearly her entire family.
The ordeals, the ups and downs, and the turnaround Sheikh Hasina came across since that moment on August 15, 1975, was narrated in her voice in the docudrama titled “Hasina: A Daughter’s Tale” directed by Piplu Khan.
Earlier, the film, produced by —Radwan Mujib Siddiq and Nasrul Hamid Bipu— two trustees of the Centre for Research and Information (CRI), was screened at Dhaka Lit Fest, Bangladesh Film Festival in Kolkata, and International Film Festival of India (IFFI).
The film on Hasina has won international acclaim because it reflected the untold stories of her life as the daughter of Bangabandhu Sheikh Mujibur Rahman, reports UNB.