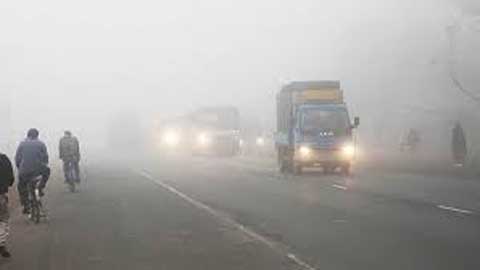 The season’s last cold wave is likely to start sweeping across Bangladesh from Wednesday after rain in Rajshahi, Rangpur, Sylhet, Mymensingh and some parts of Dhaka division, the Met Office said Sunday.“The cold wave is likely to hit the country’s northern parts on Wednesday and later sweep across the country,” AKM Nazmul Haque, a meteorologist of Bangladesh Meteorological Department, told UNB.
Sunday’s lowest temperature was recorded at 12 degrees Celsius in Sreemangal while the mercury dipped to 16.4C in the capital, the Met office said.
Light rain is likely to occur at one or two places over Rangpur, Rajshahi, Dhaka, Mymensingh, Khulna and Sylhet divisions and it may remain mainly dry with temporary partly cloudy sky elsewhere over the country, the Met Office forecast said.
Meanwhile, light to moderate fog may occur at places over the country during late night to morning while the night temperature may fall by (1-2)°C and day temperature may fall slightly over the country during this period.
The government said as many as 5,383 cold-related cases were reported from across the country in the last 24 hours till Saturday.
So far, 57 deaths have been confirmed due to cold-related illnesses since November last year.
Since then, 395,260 people had been affected by cold-related diseases. Of them, 62,793 were treated for acute respiratory infection or ARI, and 152,654 others were affected by diarrhoea, reports UNB.