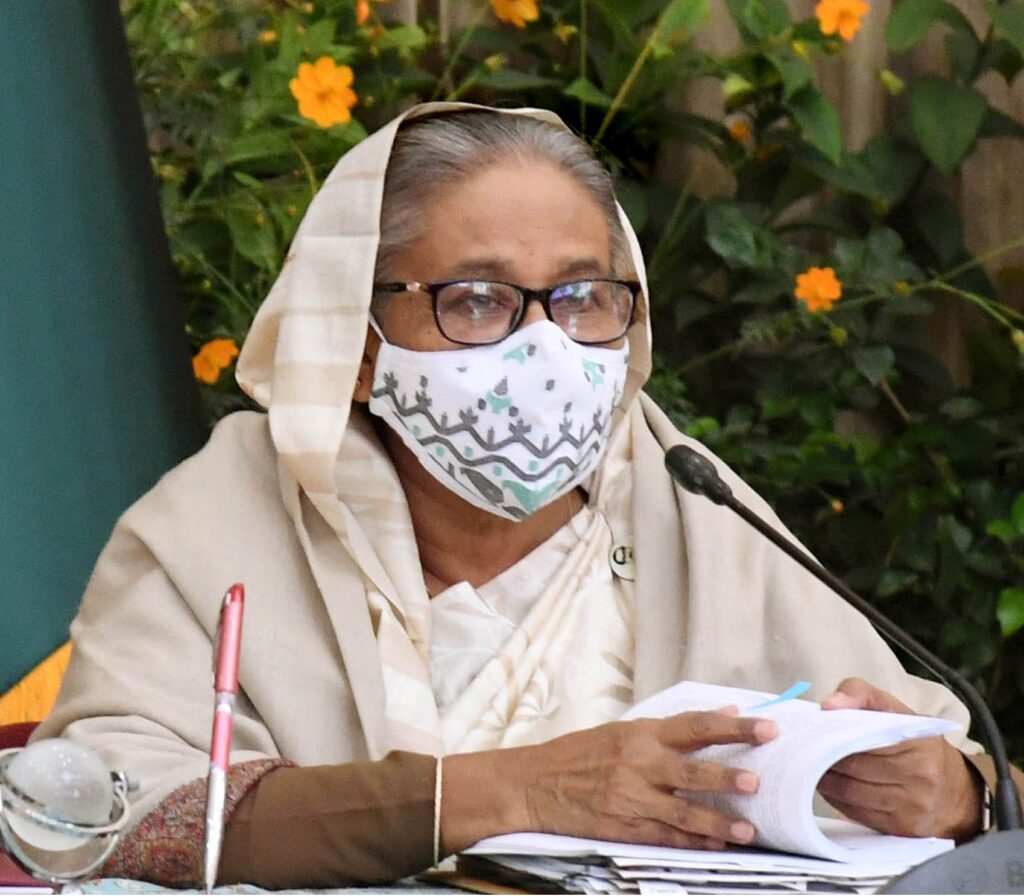 Sangsad Bhaban, Jan 20 – Prime Minister Sheikh Hasina on Wednesday said Bangladesh has been able to avert the economic recession due to the Covid-19 pandemic though many countries across the world have suffered the most.“It was possible to maintain the normal economic situation in the country as the government had taken special steps for saving human lives and facing the economic crisis during the coronavirus pandemic,” she said.
The Prime Minister said this while responding to a tabled question from Jatiya Party MP Rawshan Ara Mannan and ruling party MP Kazim Uddin during PM’s question-answer session in Parliament.
Responding to a question from Ahsanul Huq, the Prime Minister said the government is facing the problem with caution from the very beginning of the pandemic.
“As a result, Bangladesh has been able to relatively show a better success in controlling the spiraling number of Covid-19 infected patients, death rate and economic losses,” she said.
Responding to Jatiya Party MP Shamim Haider Patwary, Sheikh Hasina said the government has taken various measurers to send back Bangladeshi expatriates by creating new employment opportunities for those who have lost their jobs abroad and failed to go back to their destination of jobs as they got stuck in Bangladesh due to the pandemic.
The Prime Minister said the Foreign Ministry is in touch with the Foreign Ministries of the countries which recruit foreign workers.
“Three points are getting importance in this regard — ensuring minimum food and health facilities of the terminated expatriates, facilitating the return of those lost jobs with all benefits and six months’ salaries and requesting the destination countries for creating Covid-19 recovery and response fund for creating jobs and setting up of small industries in those countries,” she said.
According to the ‘World Economic League Table 2021’ of British Economic Research organisation ‘Center for Economic and Business Research’, Bangladesh will be the 25th largest economy by 2035 if the economic expansion which Bangladesh is going through now continues.
This report, she said, there is a forecast about the economic growth of the countries over the next year and also the next 15 years. As per the index of the 2020, Bangladesh is now the 41th economy of the world.
Amid the coronavirus situation, many countries suffered economic recession, but Bangladesh has largely been able to avert the situation, the Prime Minister said.
In FY2020, the economic growth of the country was 5.24 percent while the growth in FY2019 was 8.15 percent, which was the highest in the history of Bangladesh, Hasina said.
“It was possible to make the economic situation normal during the pandemic as the government had taken special measurers for saving people’s lives and facing economic crisis,” the PM said.
She also said a process is underway to gather three crore Covid-19 vaccine doses and the vaccination programme will begin soon.
Replying to Sultana Nadira (Woman reserved seat), the Leader of the House said the process to provide 66,000 houses among the landless and homeless families is going on for the first phase observing the birth centenary of the Father of the Nation Bangabandhu Sheikh Mujibur Rahman.
Sheikh Hasina mentioned that the government will gradually give houses to 8,85,522 families across the country.
Replying to Jatiya Party MP Mashiur Rahman Ranga, she said a process is on under the Delta Plan, to form Delta Fund structure and policy for conducting the Fund. – UNB