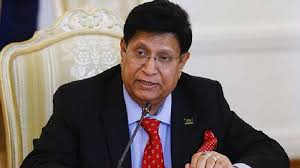 Dhaka, Mar 6: Foreign Minister Dr AK Abdul Momen on Saturday highlighted Bangladesh’s “indomitable” spirit with success stories in its journey towards higher development trajectory noting that the country becomes successful whatever it chases for the better. He made the remarks at a prize-distribution ceremony after a friendly cricket match between Diplomatic Correspondents Association, Bangladesh (DCAB) and the Ministry of Foreign Affairs at BUET central field.
Foreign Secretary Masud Bin Momen, Maritime Affairs Unit Secretary Rear Admiral (retd) Md Khurshed Alam, Vice Chancellor of Bangladesh University of Science and Technology (BUET) Prof Satya Prasad Majumder, DCAB President Pantho Rahaman and DCAB General Secretary AKM Moinuddin were present.
The Foreign Minister talked about Bangladesh’s graduation from the LDC status as the United Nations Committee for Development Policy recommended Bangladesh’s graduation from Least Developed Country (LDC) status and Bangladesh cricket team’s success in the international competitions despite Bangladesh not being the origin of cricket.
“This year is a year of good news. It’s a big achievement for Bangladesh as we’re set to celebrate 50 years of our Independence with ongoing celebration of the birth centenary of our Father of the Nation Bangabandhu Sheikh Mujibur Rahman,” Dr Momen said.
The Foreign Minister appreciated the professionalism of the DCAB members and their continuous chase for news encouraged them, too. “We’re thankful to them (diplomatic correspondents).”
He said they want to be a very transparent government and journalists are playing a big role by maintaining professionalism.
Dr Momen said he is very delighted to see that their officers are good at sports too though they remain so busy with their works.
“They all remain busy. It’s not a 9 am-5 pm job but 7/24-hour job. It’s good to play amid busyness,” said the Foreign Minister.
Dr Momen said they are trying to maintain the interaction. “It’s not important who has won and who didn’t win. The important element is we maintained the team spirit.”
He appreciated the young officers at the Ministry of Foreign Affairs who graduated from BUET and they played very well.
Foreign Secretary Masud Momen expressed satisfaction over such programmes as part of sports diplomacy and thanked the Foreign Minister for his continuous encouragement.
The MoFA team won the toss and decided to bat first. They set a challenging target of 150 runs before the DCAB team.
The DCAB team scored 108 losing all the wickets by playing only 13 overs of the 16-over match.
Later, the Foreign Minister, Foreign Secretary, MAU Secretary and BUET VC handed over prizes among the players of the two teams.