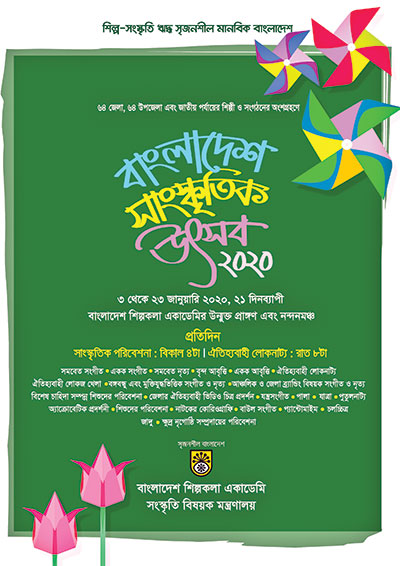 The 2nd ‘Bangladesh Sangskritik Utsab 2020’ has started on Friday at Bangladesh Shilpakala Academy (BSA), Segunbagicha in the city. The 21 day-long festival is going to be held at different sections of Bangladesh Shilpakala Academy (BSA). The aim of this festival is to impulse the cultural practices among the citizen of the country.
Planning Minister MA Mannan MP was the chief guest at the inaugural ceremony of the festival, chaired by the director general of BSA Liaquat Ali Lucky. State Minister for Cultural Affairs KM Khalid MP inaugurated the mega event at Nandan Mancha of BSA. Dr. Abu Hena Mostafa Kamal, secretary for Ministry of Cultural Affairs, joined the inaugural ceremony as the special guest.

Over five thousand artistes from across the country will be performing at ‘Bangladesh Sangskritik Utsab 2020’. The festival features group performances, instrumentals, traditional sports, recitals, jatrapala, acrobatic shows, puppet shows, folk songs and many more. There will also be performances by the ethnic minority groups. The festival will continue till January 23.