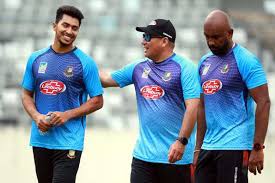 The South African coach talked to the media on Wednesday for the first time after his arrival in Dhaka.“Bangladesh ended the World Cup being number eight. They failed to come up with a great performance in their three-match series in Sri Lanka. Despite this fact, I believe Bangladesh is really close to becoming a big force in international cricket,” Domingo said in his first appearance before the local media in the morning.

“They played in the World Cup. In some of the matches, they were really close to sealing the game. As against New Zealand, they were really close but a mistake cost them the game. They performed poorly in Sri Lanka but it doesn’t mean that they’re a bad team. They just need to do the right thing at the right time. It’ll make them a big force in the international cricket,” he added.

Right after the press meet, Domingo joined the conditioning camp of the Tigers which started two days ago under the supervision of fitness and conditioning coach Mario Villavarayan. Now, Domingo will take over.

“I’ve talked to some of the players as every one of the team was not present today. I’ve talked to the support staff who are looking after the boys for a few days now. I’m now focusing on the first assignment against Afghanistan and Zimbabwe. In these series, I have to make a good connection with the boys,” Domingo added.

Along with Domingo, his compatriot and Tigers’ new pace-bowling coach Charl Langeveldt was also present at the press meet. Both of them looked overwhelmed seeing many reporters covering the event.

“I’ve never seen as many reporters in a press meet. In South Africa, we see 8-9 reporters even before a big South African game. So, the passion of Bangladesh for cricket is unbelievable. And this is what that attracted me to come to this part of the world,” Domingo told the media.

Domingo was interviewed by Bangladesh Cricket Board (BCB) right before the Eid vacation. He was among the other candidates who were shortlisted by it to hand over the role of the new head coach. Domingo, however, beat his competitors by his thinking about Bangladesh cricket and his presentation to the board.

On Wednesday, Domingo explained what he showed BCB that prompted them to award the role saying: “It’s interesting that there’re many talks about the presentation. I’ve worked at a lot at different levels of cricket — from Under-15 to Under-17 to domestic cricket to international cricket. I think I’m very much aware of how important feeder systems are.”

He continued: “That’s where your next tier of players comes from. I want to place a lot of emphasis on monitoring the players just beneath the national side, and when there’re opportunities to play some of those players, you need to take those opportunities. So, I think the gist of the presentation was that, that we’ve got a good national side but it’s important that we are evaluating the players just below the national side to sustain the success of Bangladesh cricket.”

This is the seventh time when Domingo came to Bangladesh. He first came to Dhaka in 2004 as the coach of the South Africa Under-19 team. But Langeveldt worked for a subcontinental team- Afghanistan before.

Langeveldt believes despite the difference of the culture, they will be enjoying their role in the Bangladesh support staff team. He said: “There was not a cultural problem when I worked for Afghanistan. The subcontinental players, fans and management are passionate about cricket and this is what we deal with.”

The Tigers are now gearing up for their new home season which is set to kick off with the one-off Test against Afghanistan in the first week of September. After that, the Tigers will face Afghanistan and Zimbabwe in a tri-series T20. Both of Domingo and Langeveldt are confident to see their new team flare up in these matches.UNB