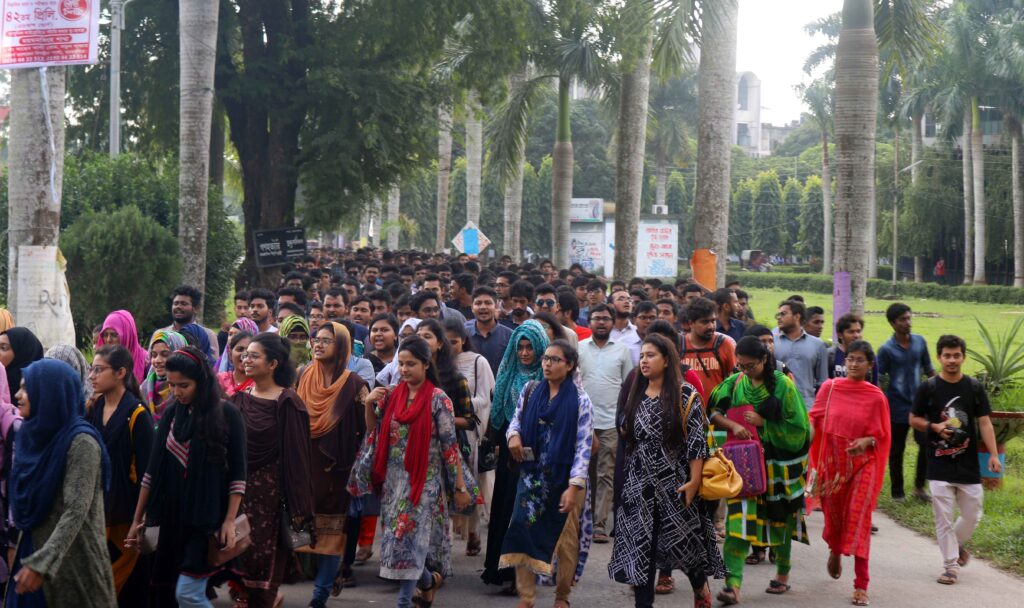 Mymensingh, Nov 13 – General students of the Bangladesh Agricultural University (BAU) held a long march abstaining from classes and exams to press their nine-points demand on Wednesday. They also complained of the university administration’s negligence over the death of a foreign student.

Sources said, at around 8:30 am, a long march started under the leadership of various faculty-student representatives. During this time, they discontinued the ongoing class-exams of Fisheries and Animal Husbandry faculty. Later, the protesters marched to the university health care centre and spoke on health care irregularities.
Students alleged that an ailing foreign student was taken to Mymensingh Medical College Hospital by auto because the ambulance was not available at that time. We will not quit the movement with only assurance like in the past. The administration has to give a written document specifying the exact date of implementation. Until the demands are implemented, all types of class-exams abstention will continue.
Meanwhile, university Vice-Chancellor has formed a probe committee comprising five members chaired by Pro-VC Prof Dr Jasimuddin Khan. He has been asked to submit the report by Thursday.
Vice-Chancellor Prof Dr Lutful Hassan said students’ logical demands will be implemented. I am sincere in this regard. Everything has to be done according to the rules of the university, he added. – BAU Correspondent