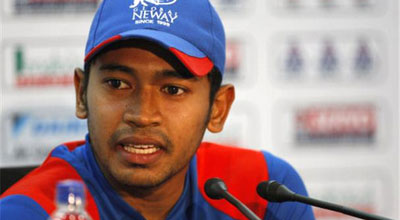 Mushfiqur Rahim has been retained as Bangladesh’s captain, after he accepted the job following a discussion with BCB president Nazmul Hassan. The Bangladesh board handed Mushfiqur – who had resigned his post following Bangladesh’s ODI series loss to Zimbabwe in May – the captaincy till December 31 this year, meaning he will be in charge till the home series against New Zealand that begins in October.
Mushfiqur, in the days following his resignation, had admitted to making a “mistake”. The board had said they would conduct an investigation into the matter, but it was ultimately Mushfiqur’s discussion with Hassan that produced the decision.
“The tenures of Mushfiqur Rahim and [vice-captain] Mahmudullah ended recently,” the BCB’s media committee chairman, Jalal Yunus, said. “Mushfiqur has talked to the president, there he agreed to lead Bangladesh. He and Mahmudullah have been given extension as captain and vice-captain till December 31, 2013.”
The decision to keep Mushfiqur in the job, provided he agreed to it, was always a certainty, given that he had led Bangladesh to an ODI series win over West Indies last year, a Test win over Zimbabwe, drew a Test against Sri Lanka and also secured an ODI series draw against the same opponents. Mahmudullah remains his deputy despite a run of low scores in Sri Lanka and Zimbabwe.
The captaincy issue was one of several discussion points during the BCB’s ad-hoc executive committee’s meeting on Wednesday, which lasted more than six hours. Another major decision to come out of the meeting was the confirmation of Shane Jurgensen as head coach till the 2015 World Cup. Jurgensen was made the interim coach last year, after Richard Pybus quit the job in October. He is considered to be a calming influence on the team.
Bangladesh’s three-man selection panel will be in charge till September this year. The tenure of chief selector Akram Khan, Minhajul Abedin and Habibul Bashar expired on June 30, but they will select the squad for the New Zealand series. ESPNcricinfo has learned that the selection panel is unlikely to change even after September. The board’s cricket operations committee did not propose an expansion of the selection panel to a five-member committee, as they had talked about doing recently.
– Cricinfo