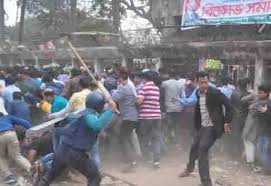 Dhaka, March 03 – An emergency meeting expressing concern over the security of the National Press Club members was held on Monday.
The meeting was presided over by the president of the club, Farida Yasmin, regarding the unfortunate situation that arose in front of the National Press Club earlier on February 26, during the protest program of the BNP’s student wing (Chhatra Dal). According to some witnesses and security guards, a large number of BNP supporters were already in the club premises on the occasion of a Zia Parishad event that day. After the clash between the students and the police in front of the club, they helped the students to enter the club’s premises by breaking the main gate, after which they threw brickbats and stones at the police positioned outside.
In retaliation, police fired tear gas shells at the club premises and even entered and charged batons. In this situation, naturally, the members inside the club felt extremely insecure.
Three members of the club’s management committee, including an official, were injured while trying to prevent them from spreading clash inside the club building says a press release.
According to the club’s rules, it is forbidden to chant slogans in the club premises, throwing bricks and batons from inside or outside, and obviously breaking the gate – all of which happened on the day. This was deemed unacceptable at the meeting.
The police entering the club premises breaching the gate, throwing tear gas shells, baton-charging, were found to be unfortunate – members expect the police to behave responsibly in any situation.
A committee was formed by the club to investigate the whole incident, and their report has already been submitted. According to their report, the next steps will be taken so that such incidents do not happen again.
The club authorities aim to maintain a delicate balance: they do not want to ban or regulate political activities here but expect responsible behaviour from all parties involved. – UNB