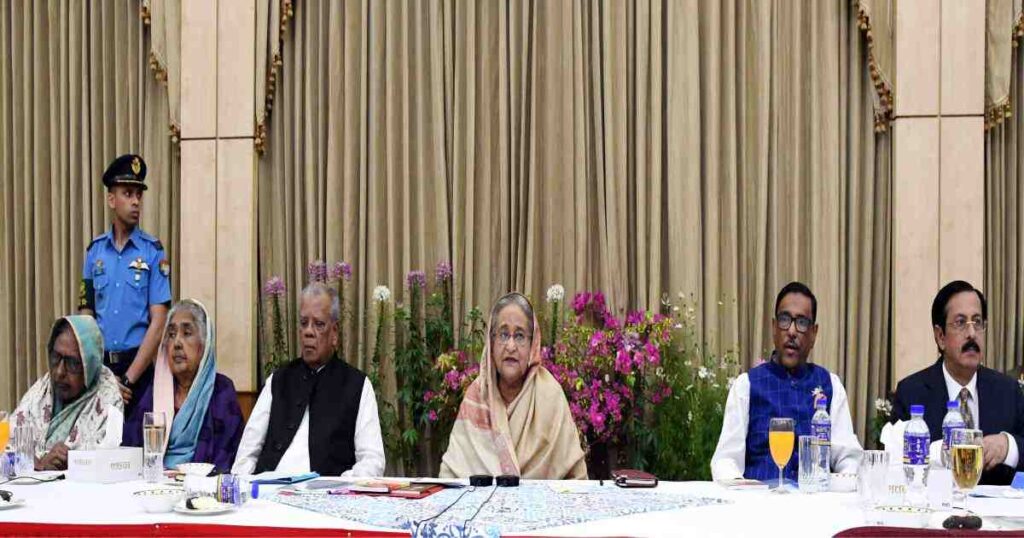 Dhaka, March 09 – Prime Minister Sheikh Hasina on Monday said the government has rescheduled the birth centenary celebration programmes of Father of the Nation Bangabandhu Sheikh Mujibur Rahman considering people’s welfare following the detection of coronavirus in Bangladesh.“We think it’s our responsibility and duty to look after the safety and health of the country’s people,” she said while delivering her introductory speech at a meeting of the Awami League Central Working Committee at her official residence Ganobhaban.
The Prime Minister said the programmes where a huge number of people will gather will be announced later. “We won’t observe these programmes at this moment. However, other programmes will go as per the schedule.”
She mentioned that the invited guests who will come here from different countries will also face problems as coronavirus has so far spread to more than 100 countries across the globe. “After overcoming this crisis, we’ll announce those programmes later.”
Sheikh Hasina, the eldest daughter of Bangabandhu Sheikh Mujibur Rahman, said her family members, including Sheikh Rehana, Saima Wazed Hossain and Radwan Mujib Siddiq, sat with the centenary celebration committee on Sunday and they all gave their consent to reschedule the programmes which will bring a huge number of people in one place. “To us, the welfare of the people matters most.”
She said getting a chance to celebrate the birth centenary of the Father of the Nation is a great opportunity for them. “There’s no doubt about that. We’ll celebrate it in different ways keeping in consideration the lesser public gathering in programmes,” she said.
The Prime Minister said the aim of this decision is to keep the people of the country out of danger at any cost.
She also said the government has postponed the children’s rally on the Independence Day (March 26) for the same reason.
Hasina said the government has taken all sorts of preparations to face the coronavirus outbreak. “We’ve prepared hospitals in Dhaka, and district and Upazila levels to provide treatment to coronavirus-affected people.”
She urged all not to get panicked and instead go to doctors if anyone has any suspicion about getting infected by this virus. “There’s no logic behind running here and there without any reason, all will have to follow the health instructions,” she said.
The Prime Minister said the virus might stay for some days but not for long. “This virus can’t live for long and fly in the air. There’s no reason to be panicked,” she said.
She also criticised a section of newspapers for creating unnecessary panic among people about buying hand sanitiser. “I don’t know whether they have any company or agency for selling these for which they are telling people to buy those. There’s no reason to get panicked,” she said.
Sheikh Hasina said diseases from coronavirus infections range from normal cold to fever-related problems and these are nothing deadlier than diseases caused by a normal virus.
People should not wear masks all the time for fear of coronavirus infection, she said, adding that only infected patients should wear those so that coronavirus cannot spread.
Terming the present time the time of season change, the Prime Minister said no one should begin to tremble with fear due to fever or cold-related problems caused by viruses.
She asked all concerned to create awareness about washing hands, drinking adequate water and keeping surroundings clean instead of terrifying people.
Hasina also put emphasis on making massive publicity to remain safe from coronavirus.
About three people identified as coronavirus infected, she said they have been isolated and kept in a hospital for specialised treatment. – UNB