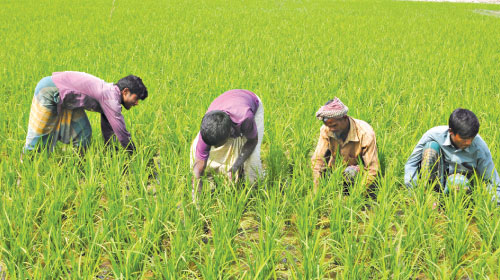 Food Department began Boro paddy and rice procurement drives in Sadar
Upazila of the district on Sunday amid much enthusiasm to the farmers
and the millers.
A simple function organized by Department of Food and upazila
administration was held on the premises of local supply depot (LSD) in
Shukhnagar area of the town here with Sadar UNO Mamunur Rashid in the
chair.
Mahbub Ara Begum Gini, MP, addressed the function as the chief guest
and deputy commissioner Dr Quazi Anwarul Haque and deputy director of
Department of Agriculture Extension were present as the special guests
while district food controller M Saiful Alam made his welcome speech.
Speaking on the occasion local lawmaker Mahbub Ara Begum asked the
food officials to conduct paddy and rice procurement drives as per
government guidelines.
Later, she formally inaugurated the procurement drive at the godown of
LSD in the area through cutting a red tape and purchasing paddy and
rice from the farmers and the millers of the upazila.
Office sources said the government has set a target to purchase a
total of 616 tonnes of paddy from the farmers directly and 3,331
tonnes of rice from the millers of the upazila during the current Boro
season.
Earlier, the procurement drive began in Gobindaganj upazila in the
district on May 19 and the drive is progressing fast as the food
officials are getting positive response from the farmers and the
millers.
District food controller M Saiful Alam said as many as 3,929 tonnes of
Boro paddy and 24,699 tonnes of rice would be procured from 11
purchasing centers of all the seven upazilas in the district this
year. Per kg paddy from the farmers and rice from the millers are
being purchased at Taka 18 and 28 respectively, he also said.
BSS from Netrakona adds: The farmers of the district are expecting
bumper production of boro paddy in the current season as harvesting of
the paddy is nearing to completion with excellent yield rates.
District Agriculture Extension Department (DAED) office sources said a
total of 1,74,420 hectors of land were brought under the cultivation
in ten upazilas of the district with the production target of 6.5 lakh
tonnes of boro rice. But, now the crop specialists of DAED said over
seven lakh tonnes of boro rice would be produced in the district if
the harvesting of the paddy are completed properly.
Meanwhile, 90 per cent harvesting work has been completed and the rest
harvesting of paddy would be completed within a week or two weeks, the
deputy director of the DAED Kazi Nurul Islam said.
The deputy director said the production of high yielding variety from
per hectare of land stands at 3.6 to 3.9 tonnes, local variety at 2
tonnes and hybrid at 5 tonnes of rice in most of the area of the
district.
The Boro cultivators could achieve the excellent yield rates due to
favorable climate condition, adequate supply of necessary agricultural
equipments including improved quality seeds, mixed fertilizers and
ensuring proper electricity supply in the rural areas.
Besides, Bangladesh Krishi Bank is disbursing special agri-loans to
the farmers to make the programme success.
(BSS, Gaibandha)