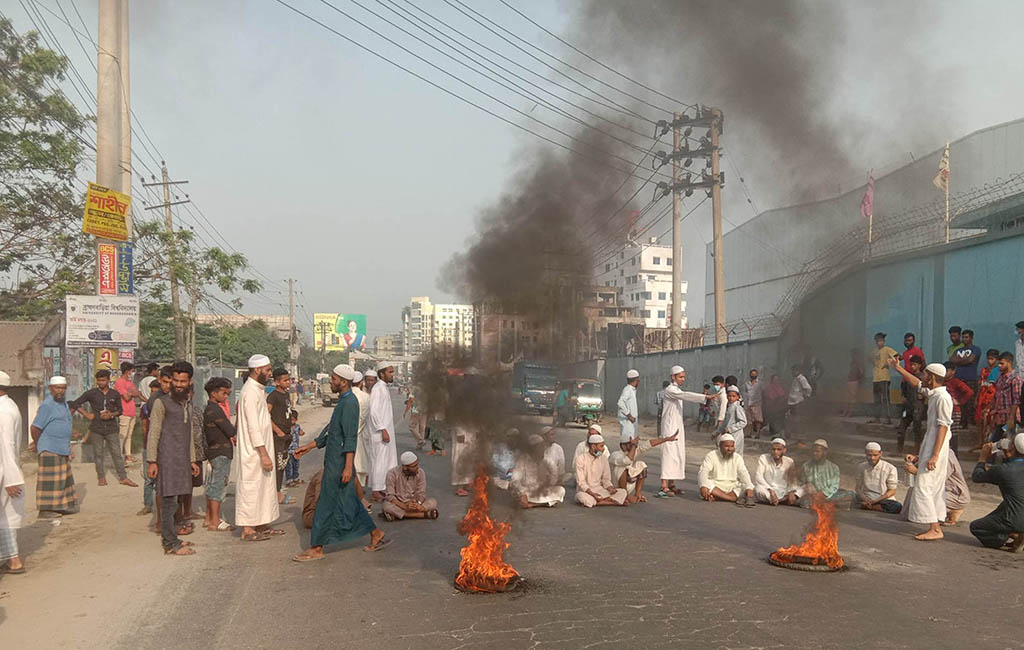 Brahmanbaria, Apr 26:  Police in a drive arrested ten people including a local leader of Hefazat e-Islam from different parts of the district in the past 24 hours till Monday morning.
The arrests were made in connection with the last month’s mayhem carried out Hefazat-e-Islam supporters in the district.
The arrests were made after identifying the accused from video footage and images taken during the violence, according to the special branch of district police.
Mufti Zakaria Khan, 43, assistant publicity secretary of district unit Hefazat-e-Islam and also the teacher of Brahmanbaria Jamia Yunisia Madrasha was among the arrestee, said police.
During interrogation, Zakaria said he took part in the violence and arson attack directly following the directives of top Hefazat men of the madrasha.
So far, 55 cases have been filed and 369 people arrested in connection the rampage, the police said.
On March 27, at least five people were killed and around 50 others, including 25 cops, injured in clashes between members of law enforcement agencies and locals during Hefazat’s demonstrations at Nandanpur in Sadar upazila. They had staged the protests against Indian Prime Minister Narendra Modi’s visit to Bangladesh.
The next day, during Hefazat’s countrywide dawn-to-dusk hartal protesting police action on their anti-Modi processions in Dhaka, Chattogram and other districts, activists set fire to three buildings, including the land office in Brahmanbaria Sadar upazila.
They had also attacked a Chattogram-bound train at Talshohor Rail Station in Brahmanbaria town.
Besides, the Hefazat supporters also vandalised several private and government establishments, including Zila Parishad building, municipality building, Police Lines, Industrial School, land office, Alauddin Music Academy, and Foirtala Bus Stand in Sadar upazila.
The supporters had also attacked Brahmanbaria Press Club and confined some journalists to the premises, reports UNB.