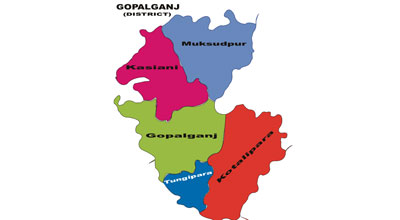 agriculture
BRRI paddy Field Day observed in Gopalganj
Field Day of BRRI paddy was  observed at Boiltali under Gopalganj
Sadar Upazila in Gopalganj  on Monday. ACI Crop Care and Department of
Agriculture Extension (DAE), Gopalganj jointly arranged the programme.
According to Department of Agriculture Extension BRRI Dhan-29 was
cultivated 26,468 hectares of land in five Upazilas of Gopalganj
district, where production target was 2,15,978 metric tones (MT) this
year and farmers achieved a bumper yield. Ashit Kumar Saha, Deputy
Director (DD) Department of Agriculture Extension (DAE), Gopalganj
and Md Habibur Rahman, General Manager (GM) of ACI Crop Care & Public
Health spoken in the function as the chief and special guests
respectively and they urged to the local farmers to using Flora on
their land in large scale to make economical achievement for the
growers, they said in the function. Earlier, DD, Agriculture formally
inaugurated the harvesting programme by cutting the paddy in the field
at Boiltali under Gopalganj Sadar Upazila in the district. After
harvesting the crop the farmer expressed his satisfaction over the
output as he got 7.34 metric tones of paddy from per hectare of land,
said Fanindranath Bala (53) a local farmer of village Boiltali under
Gopalganj Sadar. A large number of people including farmers, Upazila &
Union level agriculture officers, representative of ACI formulations
Ltd, public representatives, local elite and journalists were present
on the occasion.
(Our Correspondent)