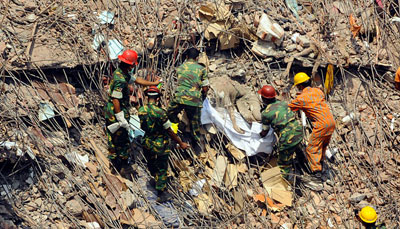 The death toll rose to 705 in Savar Rana Plaza collapse with the recovery of 15 more bodies the debris till 01:50pm Tuesday on the 14th day of the incident.Of them, a total of 554 bodies were identified and handed over to their families.
Confirming the death toll and body handover, Army control room said most of the recovered bodies were decomposed.
Earlier, fire fighters, Red Crescent men led-by Army recovered 57 more bodies from the debris from early Monday to midnight.
Rescuers suspected that many bodies remained trapped under the collapsed building.
Rescue team is conducting the 2nd phase of the rescue operation with heavy equipments continued for the sixth consecutive day to recover last body from the rubble in the collapsed nine-storied building.
Earlier on April 24, the 9-storied building–Rana Plaza collapsed in Savar bus stand area of Dhaka which housed five garment factories, a branch of bank and a market.
(Source: banglanews24.com)