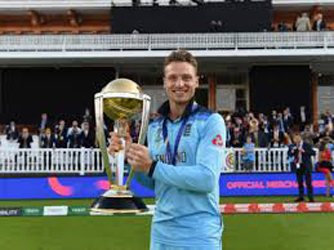 England’s Jos Buttler is auctioning the shirt he wore in last year’s dramatic World Cup final win in support of hospitals treating the coronavirus.The 29-year-old wicket keeper/batsman played a key role in England’s thrilling defeat of New Zealand at Lord’s in July, scoring a fifty, batting
in the Super Over and then running out Martin Guptill off the very last ball of the match.
In a social media video posted on Tuesday, the 29-year-old said he would be posting the jersey, signed by all members of the World Cup-winning squad, on
eBay.
All proceeds will go to the Royal Brompton and Harefield hospitals’ charity.
“As we all know, hospitals, doctors, nurses and the NHS are all doing quite an incredible job at the moment,” Buttler said.
“And in the weeks and months to come they are going to need our support even more.
“Last week, the Royal Brompton and Harefield hospitals’ charity launched an emergency appeal to provide lifesaving equipment for those two hospitals,
specialising in lung and heart conditions in preparation for the COVID-19 outbreak.
“To help with their fundraising effort I’m going to be donating this shirt,which is the shirt I wore in the World Cup final last year, signed by all the
players who were members of the squad.”
British television personality Piers Morgan submitted a bid of œ10,000 ($12,422) but the value of the shirt had soon passed the œ12,000 mark.
Cricket, in common with many sports, has seen its fixture programme brought to a shuddering halt by the global spread of the coronavirus.
Buttler was on England’s tour of Sri Lanka that was recently abandoned during a warm-up game and was due to play in the lucrative Indian Premier
League Twenty20 event, which has been postponed until at least April 15.
There will be no cricket in England until May 28 at the earliest, reports AFP, London.