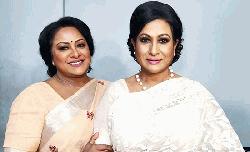 Cultural Correspondent
Senior actresses Champa and Aruna Biswas have teamed up after nearly twenty-two years for film ‘Shaan’. The film casts Siam Ahmed as the lead actor opposite Puja Cherry and Taskeen Rahman in the negative role. Champa will act as the mother to Siam while Aruna Biswas will act as mother to Puja in the film. It will be the first one from director M Rahim. Quick Multimedia is producing the film while Jaaz Multimedia will promote it. Shooting of the film started on May 26 in Uttara and will be continued outside Dhaka from June 3.
Champa and Aruna were last seen in Julhas Chowdhury’s film ‘Premer Smrity’ from 1997. Manna and Aliraz had also acted in the film.
About their recasting after twenty-two years Champa said that twenty-two years is a long time. A lot have changed since their last acting together, film-industry and country have changed drastically. But still the relationships remain intact and thus Champa said that she and Aruna really enjoyed their new shooting while reminiscing their old days of working together.
Aruna while noting Champa as a great actress said that a long time ago the two had acted in a lot of films together. Aruna added that she along with Champa have found story and characters of the new film to be great.
Shaan is to be an action thriller where Israeli Marshall Art-Krav Maga will be used and actors Siam and Taskin are taking practical training in the defense-offensive technique. The director M Rahim previously serves as Assistant Director in the films ‘Poramon 2’ and ‘Dohon’ and also worked with Indian filmmaker Raj Chakraborty.