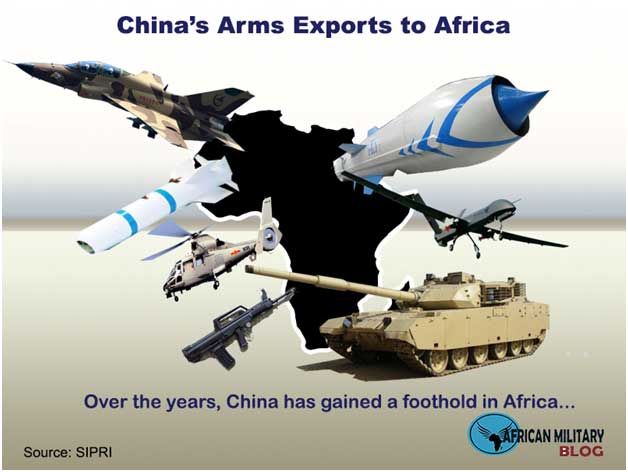 By Thalif Deen
UN, Jan 27 2020 (IPS) – Donald Trump, the vociferously unpredictable US president, has long chastised China for seeking “unfair” advantage over trade and tariffs, violating intellectual property rights and “manipulating” the country’s currency to its advantage.
But while this blatant political rhetoric has continued ever since Trump assumed office in 2017, the Chinese have steadily built a massive military arsenal — and joined the world’s major players in arms production and arms exports.
In a new report, released January 27, the Stockholm International Peace Research Institute (SIPRI), said that China is now the world’s second-largest arms producer, ranking behind the United States and ahead of Russia.
And in 2014-18, the five largest arms exporters were the United States, Russia, France, Germany and China—in that order.
At the United Nations, China is a veto-wielding permanent member of the Security Council, along with the US, UK, France and Russia.
According to SIPRI, China has invested considerably in the modernization of its arm industry since the 1960s, and particularly since 1999.
One of its primary aims is to be self-reliant in the production of advanced weapons and technologies for its armed forces.
However, due to lack of transparency, the value of Chinese arms sales has been either unknown or based on unreliable estimates – until now.
Based on estimated arms sales in 2015–17, SIPRI has identified four major Chinese arms companies as the front-runners.
In 2017, of the 20 largest companies in the SIPRI Top 100, 11 were based in the US, six in Western Europe and three in Russia.
If the four Chinese arms companies, investigated in the study, were included in the top 100, they would all rank among the top 20, with combined estimated arms sales totalling $54.1 billion. Three of the companies would be ranked in the top 10, said SIPRI.
The four have been identified as Aviation Industry Corporation of China (AVIC), China North Industries Corporation (NORINCO), China Electronics Technology Group Corporation CETC) and China South Industries Group Corporation (CSGC).
These companies are ranked behind the world’s four biggest arms producers: Lockheed Martin, Boeing, Northrop Grumman and Raytheon—all based in the US.
Asked whether the quality of Chinese weapons was on par with Western military equipment, Dr Nan Tian, Researcher, Arms and Military Expenditure Programme at SIPRI, told IPS generally there is the opinion that some of the Chinese weapons are still a bit behind in quality as compared to those made by Western countries.
“But we have seen massive improvements in the quality of Chinese weapons,” he added.
“This is also one of the factors why Chinese weapons are considered less expensive than Western alternatives,” he added.
The large buyers of Chinese weapons include Pakistan, Bangladesh, Myanmar and Algeria. “Most of these countries are considered friendly or are allies of China”, he pointed out.
Asked if these sales were tied to Chinese foreign policy and meant to advance political causes, he said: “Yes, indeed it has foreign policy ties, but so is the case with Russia, US and other countries as well.”
Meanwhile, according to the China Power Project at the Washington-based Center for Strategic and International Studies (CSIS), China is also an arms supplier to two other Asian countries, namely Indonesia and Thailand.
In Africa, its arms markets include Algeria, Egypt and Morocco while Chinese weapons have also been used in several military conflicts in the region, including in Sudan, Somalia and the Democratic Republic of the Congo.
Dr Nan said that China, like most other arms suppliers, often provides exports through loans or economic partnerships (i.e. 1st access to certain mineral fields).
On loans, it is common that over the course of the repayment, China will write-off the loan as a form of aid, and thus there will be no need for the buyer to pay back the loan, he explained.
According to SIPRI, the largest of the Chinese companies is Aviation Industry Corporation of China (AVIC), with arms sales totalling $20.1 billion would be sixth largest in the world.
China North Industries Group Corporation (NORINCO), which would be placed eighth in the Top 100, with sales of $17.2 billion, is in fact the world’s largest producer of land systems.
Contrary to most other major global arms producers, SIPRI said, Chinese arms companies specialize primarily in one arms production sector. For example AVIC produces mostly aircraft and avionics.
And most of the large non-Chinese arms companies produce a wider range of military products across different sectors—covering aerospace, land systems and shipbuilding within one company.
According to SIPRI, these new estimates are most likely still an underestimate. A lack of transparency in the arms sales figures of Chinese arms companies continues to hinder a complete understanding of China’s arms industry. This new research, however, acts as an important scoping study that opens the possibility for further research and prepares the ground for a fuller estimate of Chinese arms sales.
*The authors of the report are Dr Nan Tian, Researcher, Arms and Military Expenditure Programme at SIPRI and Fei Su, a Researcher with SIPRI’s China and Asia Security Programme.
The writer can be contacted at thalifdeen@ips.org