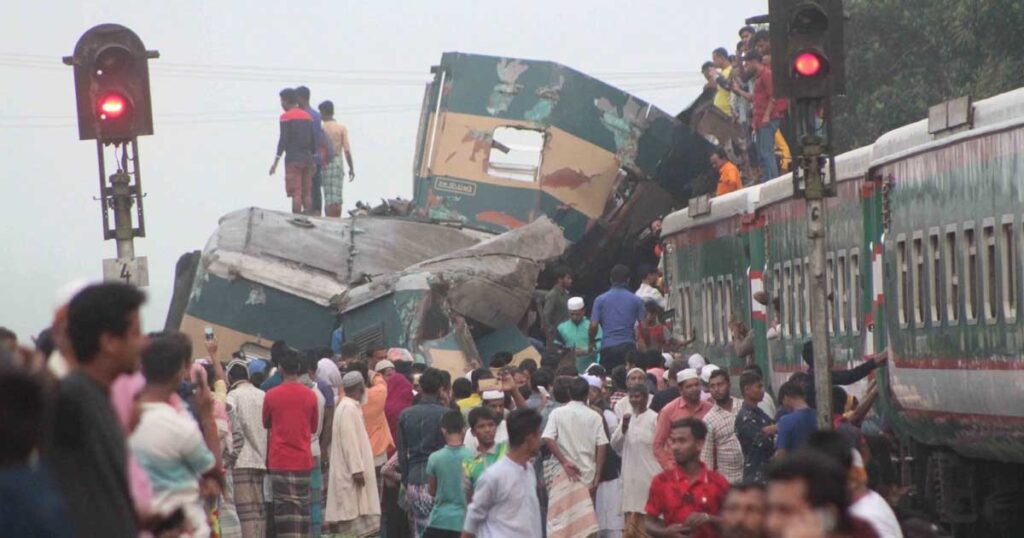 Five days after husband’s death, wife killed in Brahmanbaria train collision
Dhaka, Nov 13 – The grief-stricken family of Muslim Mia, who died while working at a shipbreaking yard in Sitakunda upazila five days ago, was returning to their residence here by a train after his funeral in his native district of Moulvibazar. But little did they know that this would be the last journey of Muslim’s wife, too.Zaheda Begum along with 15 other passengers was killed and over 100 others injured in a fatal collision between two trains on Dhaka-Chattogram route in Mandbagh Railway Station in Kasba upazila of Brahmanbaria district early Tuesday.
Her son Imon, 17, and daughters Sumi, 19, and Mim, 8, were also among the injured.
Hailing from Gazipur in Sreemangal upazila of Moulvibazar, Muslim along with his family had been living in Kadamrasul area of Sitakunda upazila for the last 45 years. He used to work at a shipbreaking yard in the upazila.
He was killed as an iron plate collapsed on him while working at Choto Kumira on November 7 last.
Victim’s son Sumon who survived the accident unhurt as he was in another compartment of the train said they buried his father at their village home.
He said the family members, including Muslim’s mother, boarded Chattogram-bound ‘Udayan Express’ train around 11:30pm after holding Qulkhwani of his father. “I lost my mother in the train collision which also left my siblings injured,” a distraught Sumon said with tears rolling down his cheeks.
Witnesses and railway sources said Turna Nishita started for Mandbhagh from Shashidal Railway Station around 2:48am. It was signalled to stop at the outer. At the same time, Udayan was approaching Mandbhagh from Kasba Railway Station and it was signalled to enter line-1.
However, Turna Nishita ignored the signal and c