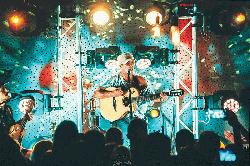 Culture Desk
A concert of the renowned French-Spanish artiste– Manu Chao is going to be held yesterday at 6.30 pm at the National Theatre Hall of Bangladesh Shilpakala Academy (BSA), Segunbagicha in the city. This concert is organised on the occasion of the 50th anniversary of ‘Francophonie’ with the support of the Embassy of France in Bangladesh.
Manu Chao is a French musician of Spanish descent. He sings in Spanish, French, English, Italian, Galician, Portuguese and occasionally in other languages.
Chao began his musical career in Paris, busking and playing with groups such as Hot Pants and Los Carayos, which combined a variety of languages and musical styles. With friends, his cousin Santi and his brother Antoine Chao, he founded the band Mano Negra in 1987, achieving considerable success, particularly in Europe.
Mano Negra split in 1994 and Manu Chao spent several years traveling throughout South and Central America, recording new music. The songs were released as Clandestino in 1998, under Manu Chao’s own name. Though not an instant success, the album gained a steady following in France with hits such as “Bongo Bong” and “Clandestino”, and the album eventually earned the Best World Music Album award in 1999’s Victoires de la Musique awards. It sold more than 5 million copies. Released at the cross-fade of the millennium, Manu Chao’s first solo album is a celebration and defence of the displaced and immigrants, that mixed a European and South American perspective in an era of more globalised pop music.
Chao’s second, Pr�xima Estaci�n: Esperanza, was released in 2001. This album, translated as “next staton: Hope “, features similar sounds to Clandestino but with heavier Caribbean influences than the previous album. The album and specially the song Me gustas tu, was an instant hit, leading to a successful tour that resulted in the 2002 live album Radio Bemba Sound System.
Two years later, Chao returned to his French roots with the French-only album Sibérie m’était contée, which included a large book featuring lyrics to the album and illustrations by Jacek Wo?niak.
Manu Chao’s next album La Radiolina (literally “little radio” in Italian, but also “pocket radio”) was released on September 17, 2007. This was the first international release since 2001’s Prxima Estacin: Esperanza. “Rainin in Paradize” was the first single from the album.
In 2003 he approached Amadou and Mariam and later produc d their 2004 album Dimanche  Bamako (“Sunday in Bamako”).
His song “Me llaman Calle”, written for the 2005 Spanish film Princesas, earned that film a Goya for Best Original Song. It has been released in 2007’s La Radiolina.
Time magazine named “Me Llaman Calle” one of The 10 Best Songs of 2007.
His song “La Vida Tmbola” was featured in the documentary film Maradona by Serbian filmmaker Emir Kusturica.
The song “La Trampa”, recorded with Tonino Carotone for the compilation album Fuerza! was used as the theme song for the short-lived improvisational comedy Drew Carey’s Green Screen Show.
The songs “Bongo Bong” and “Je ne t’aime plus”, which appear back-to-back on Clandestino, were covered by British singers Robbie Williams and Lily Allen, who recorded them as a single track, “Bongo Bong and Je Ne T’aime Plus” and released it as a single from the album Rudebox.
Actually Manu Chao remains one the most elusive of stars, to be seen busking in a local bar or playing a squat as often any high profile gigs.
There have been no album releases since La Radiolina in 2007, despite flying under the radar, there have been hundreds of gigs, sometimes in new countries for Manu like India, and scores of songs written, a few released like Seeds of Freedom, Words of Truth, A la par del amor (with Chalart58) or like the home-made tracks from Ti.po.ta, a duo consisting of him and Greek singer-actress Klelia Renesi.
As the line had it on one of the most important, autobiographical songs on Clandestino, Desaparecido – “the disappearing one … hurrying down the lost highway … When they look for me I’m not there, When they find me, I’m elsewhere”.