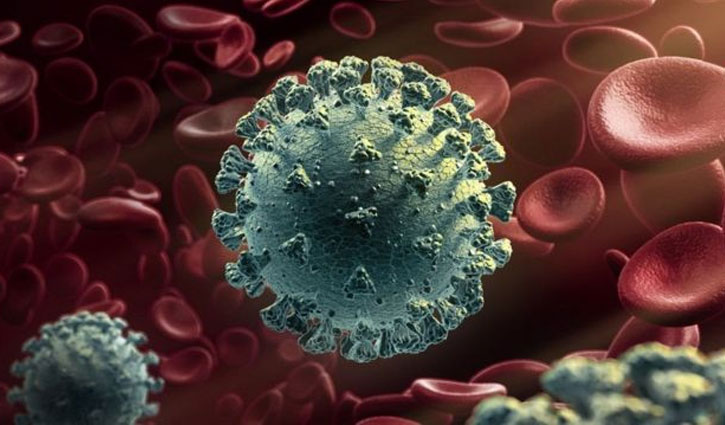 Dhaka, Mar 16 :  As the Coronavirus infection cases keep rising in Bangladesh, 26 more deaths and 1,719 new cases were reported in 24 hours till Tuesday morning, mounting concerns among people.Bangladesh witnessed 26 deaths for the 2nd consecutive day after the recent surge in infections.
With the latest figures, the Covid-19 fatalities climbed to 8,597 while the total infections to 560,887, according to a handout of the Directorate General of Health Services (DGHS).
The daily infection rate slightly fell to 8.29 percent from 9.48 percent on Monday.
But the mortality rate remained static at 1.53 percent for the last four days which was 1.54 percent in the past few weeks, the DGHS said.
The virus infection rate had come down to below 5% on January 19 last. It even had come down below 3 percent. However, the infection rate soared again on February 9 as it increased to 5.13%.
The infection rate was 5.98% on February 10 while 5.82 percent on February 11, 6.62% on February 12 and 6.26% on February 13.
Besides, 1,352 people recovered from the virus infections during the period. So far, 514,479 patients (91.73 percent) have recovered, according to the DGHS.
Bangladesh reported its first cases on March 8, 2020 and the first death on March 18 in the same year.
Authorities have so far tested 4,303,994 samples, including 20,748 in the past 24 hours.

The government is going to take a tougher position to fight Covid-19 transmission, Health Minister Zahid Maleque announced on Monday.
The ministry has sent letters to the districts, directing the officials concerned to levy fines on people flouting Covid protocols, he said.
“Educational Institutions were scheduled to resume from March 30, but the closure will be extended if the infection keeps surging at the present rate,” the Minister said.
“We’re concerned as the infection and the death rates of Covid-19 suddenly hiked,” he added.

Bangladesh launched its nationwide Covid-19 vaccination drive on February 7.
By Monday, 4,485,954 people received the first dose of the Oxford-AstraZeneca vaccine. The second dose has to be taken between 8 and 12 weeks of the first one.
The government is providing the vaccine for free. It signed an agreement with India’s Serum Institute for acquiring 30 million doses of the vaccine.
The institute will provide five million doses every month between January and June. Those who are 40 or above can register for getting the jab at www.surokkha.gov.bd as the on-spot registration system has been revoked.
Health Minister Zahid Maleque has said the age limit for getting the vaccine will be revised when more doses will be available in the country.

The world has crossed the grim milestone of 120 million Covid-19 cases — a figure that shows the pandemic is far from over, despite high rates of vaccination.
The total Covid case count reached 120,187,100 while fatalities from the virus mounted to 2,659,913 on Tuesday morning, according to Johns Hopkins University (JHU).
The US still remains the world’s worst-hit country both in terms of cases and deaths. According to the university data, the US has so far registered 29,494,095 cases and 2,659,913 deaths.
Brazil’s Covid-19 death toll approached 280,000 on Monday, after 1,057 more people died from the disease in the past 24 hours, taking the national count to 279,286, the Ministry of Health said.
The ministry also reported 36,239 new cases, bringing the national count to 11,519,609.
Currently, the country has an average of 133 deaths and 5,482 cases of infection per 100,000 inhabitants, said the ministry.
India has so far registered 11,385,339 cases and 158,728 deaths, as per the latest official data, reports UNB.