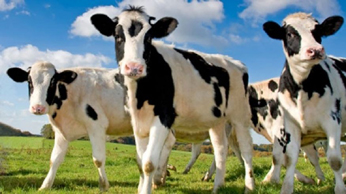 Cows have shown an “insane” and “mind-blowing” ability to tackle HIV which will help develop a vaccine, say US researchers.
In a first for immunisation, the animals rapidly produced special types of antibody that can neutralise HIV.
It is thought cows evolved a supreme immune defence due to their complex and bacteria-packed digestive system.
The US National Institutes of Health said the findings were of “great interest”.

HIV is a slippery and nefarious opponent. It mutates so readily that every time a patient’s immune system finds a way of attacking the virus, HIV shifts its appearance.
However, a small proportion of patients eventually develop “broadly neutralising antibodies” after years of infection. These attack parts the virus cannot change.
A vaccine that could train the immune system to make broadly neutralising antibodies should help prevent people being infected in the first place.
But no jab can do the job.
Then researchers at the International Aids Vaccine Initiative and the Scripps Research Institute tried immunising cows.
“The response blew our minds,” Dr Devin Sok, one of the researchers, said.
The required antibodies were being produced by the cow’s immune system in a matter of weeks.
Dr Sok added: “It was just insane how good it looked, in humans it takes three-to-five years to develop the antibodies we’re talking about.
“This is really important because we hadn’t been able to do it period.
“Who would have thought cow biology was making a significant contribution to HIV.”
The results, published in the journal Nature, showed the cow’s antibodies could neutralise 20 per cent of HIV strains within 42 days.
By 381 days, they could neutralise 96% of strains tested in the lab. -BBC