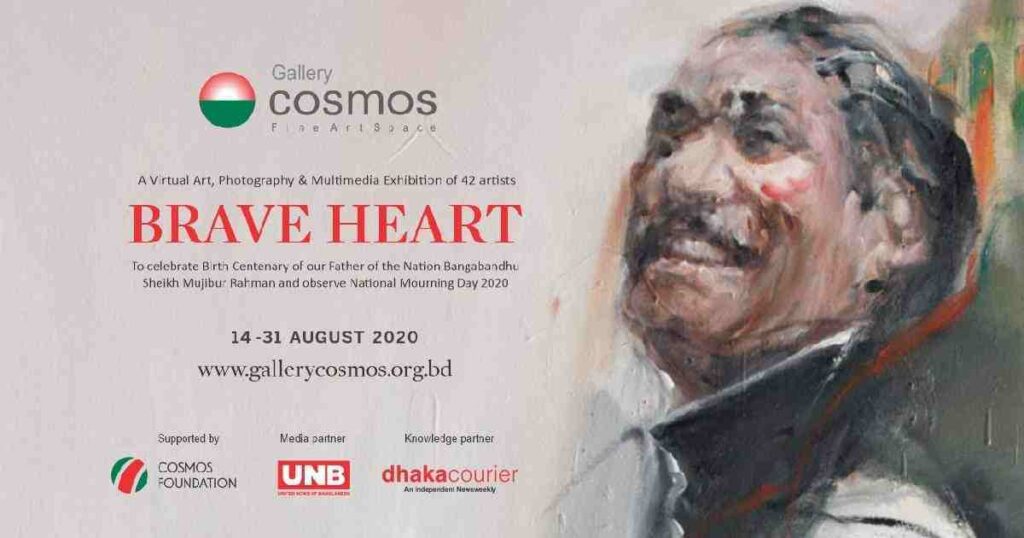 Marking National Mourning Day and the birth centenary of Father of the Nation Bangabandhu Sheikh Mujibur Rahman, the first-ever virtual art, photography and multimedia exhibition on Bangabandhu, titled ‘BRAVE HEART’, got underway on Friday.Arranged by Gallery Cosmos, a total of 50 artworks of 42 renowned Bangladeshi artists along with multimedia and photographs are being showcased in this special exhibition in the virtual gallery at www.gallerycosmos.org.bd.
Cosmos Foundation, the philanthropic arm of Bangladeshi conglomerate Cosmos Group, is supporting the multidimensional exhibition that is also featuring videos, photos and books.
United News of Bangladesh (UNB) and its sister publication Dhaka Courier are supporting the event as the media and knowledge partners respectively.
Chaired by Enayetullah Khan, Chairman of Cosmos Foundation, the online inauguration event of the exhibition was joined by Mofidul Hoque, founder trustee of Bangladesh Liberation War Museum and Prof Haider A Khan, distinguished professor of Economics at the Joseph Korbel School of International Studies, University of Denver, USA as the chief guests.
Tehmina Enayet, Director of Gallery Cosmos, also joined and gave her closing remarks at the event.
“The term ‘Brave Heart’ redirects to the meaning of ‘Lion Heart’ – and our Father of the Nation Bangabandhu Sheikh Mujibur Rahman was that iconic lion for our country and the nation. Just within three years from conquering the independence, he successfully established Bangladesh as an example and earned respect from the entire world,” Enayetullah Khan said in his opening remarks.
The event then observed a ten-second silence, in remembrance of the martyrs of August 15, 1975, including Father of the Nation, his family members and DG of DGFI Colonel (then) Jamil Uddin Ahmad, who was later posthumously promoted to Brigadier General.
Liberation War Museum trustee Mofidul Hoque then expressed his thoughts and griefs on Bangabandhu and the martyrs, saying that the nation and the people must need to learn about the eventful life and works of the Father of the Nation.
“The assassination on August 15 is undoubtedly one of the brutal and worst mercenaries in the history of mankind. The traitors didn’t give him much time after the independence of Bangladesh. However, he brilliantly managed to uphold the country’s pride to an untouchable height,” Mofidul Hoque reflected on Bangabandhu.
Praising the exhibition, he added, “The mercenaries killed our Father of the Nation’s body, but he’ll always be living through our spirits, especially arrangements like these. This first-ever interactive virtual exhibition also reminds us that we can be united through admiring arts, even at this unprecedented time of a global pandemic.”
Prof Haider A Khan said that he is proud to be part of this inauguration of this exhibition, which he calls ‘a virtual galaxy’ where one can truly feel the Father of the Nation in this first-ever virtual gallery.
A distinguished researcher of Bangabandhu’s life and works, Dr Haider said, “Bangabandhu’s mantra was ‘I’m a man of yours’ – which he had truly meant in his entire life.”
“A leader is the one who knows the way, shows the way, goes the way – and Bangabandhu is an embodiment of this motto. He established himself as the ideal leader of Bangladesh long before the independence, and he was very ‘detail-oriented’. His three remarkable speeches – the 1970 election manifesto speech, the historic 7th March speech and his United Nations assembly speech – should be studied by everyone to know how iconic a leader he had been in his lifetime.”
Paying deep respect to Shaheed Brig General Jamil Uddin Ahmad, Dr Haider said, “Many people often forget to acknowledge Shaheed Colonel (then) Jamil who also lost his life for being a patriotic and courageous person, as he was the only one who responded to Bangabandhu’s call at the dawn of August 15 and fearlessly ran out to save the great leader and his family.
“My deepest condolence and utmost respect to all members of this (Jamil’s) family which is relentlessly working for the aesthetic betterment of Bangladesh in every possible sector,” he said.
Remembering Colonel Jamil, he added, “Every nation needs a leader like Bangabandhu and a true associate like Brig General Jamil, a valiant patriot.”
In the closing remarks, Gallery Cosmos director and eldest daughter of Brig General Jamil, Tehmina Enayet said, “We as a nation lost our father on August 15 of 1975, and I lost my father too on that day. Bangabandhu was the leader of the people who believed in women empowerment – he established the system of the reserved seat for women in parliament. Fidel Castro quoted ‘I have not seen the Himalayas but I have seen Bangabandhu’, and the statement is a proof how the man Bangabandhu truly was.”
She then thanked Gallery Cosmos, Cosmos Foundation director Nahar Khan, UNB and Dhaka Courier for arranging the exhibition, after which the guests then announced the inauguration.
Participating artists in the exhibition are – AH Dhali Tomal, Abdul Guffar Babu, Abdullah Al Bashir, Afrozaa Jamil Konka, Ahmed Shamsuddoha, Alakesh Ghosh, Aloptogin Tushar, Amirul Momanin Chowdhury, Amit Nandi, Anisuzzaman Anis, Anukul Chandra Mojumder, Azmeer Hossain, Azmol Hossain, Biren Shome, Bishwajit Goswami, Dheeman Kumar Biswas, Dilip Kumar Karmakar, Farhad Hossain, Hamiduzzaman Khan, Iqbal Bahar Chy, Jamal Ahamed, Jayanta Mondal, Jayanta Sarkar John, Kamruzzoha, Kuhu Plamondon, Maneek Bonik, Md Azmal Uddin, Md. Jashim Uddin, Najib Tareque, Nasim Ahmed Nadvi, Nasir Ali Mamun, Nazia Andaleeb Preema, Nisar Hossain, Proshanta Karmakar, Ratneshwar Shutradhar, Ruhul Karim Rumee, Shahabuddin Ahmed, Shahjahan Ahmed Bikash, Sheikh Afzal Hossain, Sohel Pranon, Sourav Chowdhury and Tajul Islam.
The exhibition will continue till August 31, reports UNB.