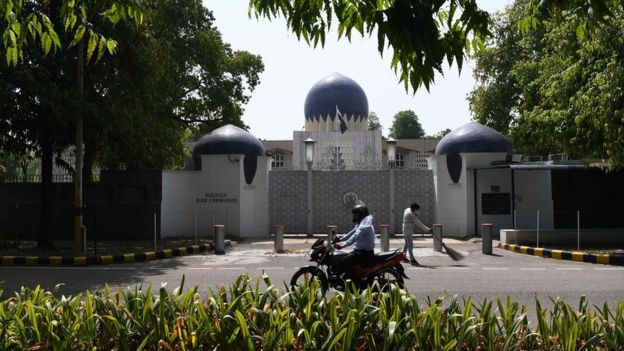 Islamabad, VOA News – Pakistan on Tuesday ordered India to cut its embassy staff in Islamabad by half, just hours after New Delhi announced a similar decision. The reciprocal action comes amid heightened tensions between the nuclear-armed South Asian rival countries over their long-running Kashmir territorial dispute.
While the expulsion of diplomats is not uncommon due to the historically acrimonious relationship, the latest diplomatic dispute began late last month when India expelled two Pakistani officials for “espionage,” prompting Pakistan to do the same in response.
In a statement issued Tuesday, the Indian Ministry of External Affairs alleged that officials at the Pakistani High Commission in New Delhi have been “engaged in acts of espionage and maintained dealings with terrorist organizations” in violation of international conventions on diplomatic relations.
“Therefore, the government of India has taken the decision to reduce the staff strength in the Pakistan High Commission in New Delhi by 50%,” the ministry noted. The Pakistani charge d’affaires was summoned and told to implement the decision within a week, the ministry added.
Islamabad quickly rejected and condemned what it said were baseless Indian allegations to seek a 50% reduction in the staff strength at the Pakistani embassy.
A Pakistani Foreign Ministry statement said the deputy chief of India’s diplomatic mission in Islamabad was summoned to the ministry to be informed of Pakistan’s decision to reduce the staff strength at the Indian High Commission by half “as a reciprocal measure” within a week.
“The latest Indian action is a part of India’s desperate attempts to divert attention from its state-terrorism and worst human rights violations in Indian-occupied Jammu and Kashmir,” the Pakistani statement asserted.
Bilateral tensions have deteriorated since last August when Indian Prime Minister Narendra Modi’s government unilaterally stripped the Indian-ruled portion of Kashmir of its decades-old constitutional semiautonomous status.
New Delhi also placed the Muslim-majority region under a strict security and communication lockdown to deter violent reaction against the move, though some restrictions have been partially eased.
Pakistan swiftly rejected India’s Kashmir-related actions, saying a decades-old United Nations resolution prevents both countries from unilaterally altering the region’s status. Islamabad also downgraded bilateral diplomatic and trade ties with New Delhi, fueling regional military tensions and leading to almost daily skirmishes across the Kashmir cease-fire line.
New Delhi, which controls two-thirds of Kashmir, maintains its actions in Kashmir are an internal Indian matter. Islamabad controls one-third of the Himalayan region. Both rival countries claim Kashmir in its entirety.
BBC News Adds: What are the details of India’s move?
According to the Hindustan Times newspaper, each of the two countries has an agreed strength of 110 staff at their respective high commissions, although the current number is actually about 90.
India’s decision means the two commissions will both have to send back 35 staff members within a week.
“They [the Pakistani staff] have been engaged in acts of espionage and maintained dealings with terrorist organisations,” India’s external affairs ministry said in a statement.
It summoned Pakistan’s Charge d’Affaires, Syed Haider Shah, to make the accusations.
He was also told, the Hindustan Times reports, that Pakistan had “engaged in a sustained campaign to intimidate the officials of the Indian High Commission in Islamabad from carrying on their legitimate diplomatic functions”.
What are the allegations about the Indian staffers?
The Indian government’s position, according to the Hindustan Times, is that Pakistani security agencies picked up the two men in Islamabad, tortured them and framed them over a road accident and fake currency.
When the two men, Dwimu Brahms and Selvadhas Paul, returned to India on Monday, they are said to have provided “graphic details of the barbaric treatment that they experienced at the hands of Pakistani agencies”.
Pakistan police say the two men were detained after running a man over and trying to flee the scene but were later released from custody because of their diplomatic status.
There was no immediate comment on the allegations that the two men had been tortured.