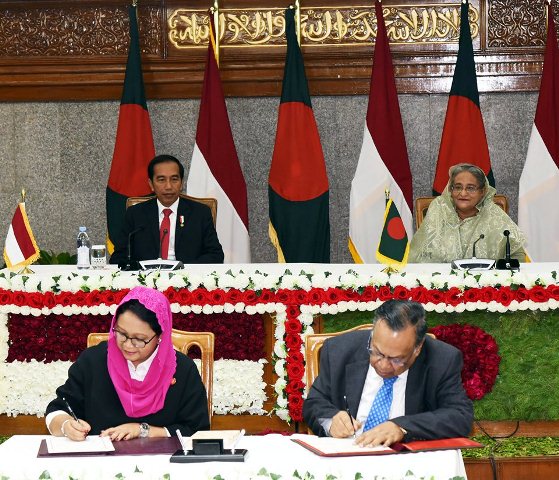 Bangladesh has sought Indonesia’s support in favour of Bangladesh’s request for Sectoral Dialogue Partnership with Asean.

He reiterated his country’s support to safe, dignified return of the displaced people to Rakhine.

She recalled the atrocities Bangladesh endured in the War of Liberation in 197L and mentioned about the resolution adopted by the Bangladesh Parliament declaring 25 March as ‘Genocide Day’.

Both the leaders stressed the need for enhancing air connectivity to promote people-to-people contact, tourism and trade.

They agreed to work to further widen cooperation in the areas of agriculture, ICT, defence and tourism.

Recognising the threats arising out of terrorism, violent extremism and radicalisation on any religious or societal pretext, the leaders agreed to work together to counter all such challenges in both countries and beyond.

President Widodo appreciated the warm hospitality and courtesies extended to him and his delegation by the government and the people of Bangladesh during the visit.

He invited the President and the Prime Minister of Bangladesh to visit Indonesia at a mutually convenient time.

Widodo paid homage at the National Mausoleum in Savar, Bangladesh in memory of the martyrs of the 1971 War of Liberation on Sunday morning.

Following this, the President paid tributes to the memory of Father of the Nation of Bangladesh Bangabandhu Sheikh Mujibur Rahman at Bangabandhu Memorial Museum.

Both leaders recalled the association between Father of the Nation Bangabandhu Sheikh Mujibur Rahman and Founding Father of Indonesia President Soekarno, particularly in the NAM.

Prime Minister Sheikh Hasina and President Widodo held a tete-a-tete, which was followed by a bilateral meeting between the two sides.

He expressed confidence that under the leadership of Hasina, Bangladesh would graduate to a middle-income country by 2021.

She noted with appreciation Indonesia’s constructive role in Asean and the OIC.

The two leaders reiterated that Bangladesh-Indonesia relationship is rooted in the shared historic, religious, cultural and linguistic heritage of the two nations.

They agreed to further strengthen the bilateral relations to achieve shared prosperity through mutually beneficial partnership.

The two leaders also agreed to hold the 3rd Meeting of the Joint Commission in 2018 in Dhaka.

Both the leaders also expressed satisfaction over the discussion on the commercial deal for sales-purchase between Petro Bangla of Bangladesh and Peftamina of Indonesia for importing LNG.

The leaders agreed to further widen and deepen cooperation in the energy sector.

Both the leaders welcomed the joint statement by the Minister of Trade of
Indonesia and the Minister of Commerce of Bangladesh to commence the process of bilateral trade negotiation.

The leaders recognised the need for collaboration between the private sectors of the two countries for availing of the opportunities of investment in both the countries.