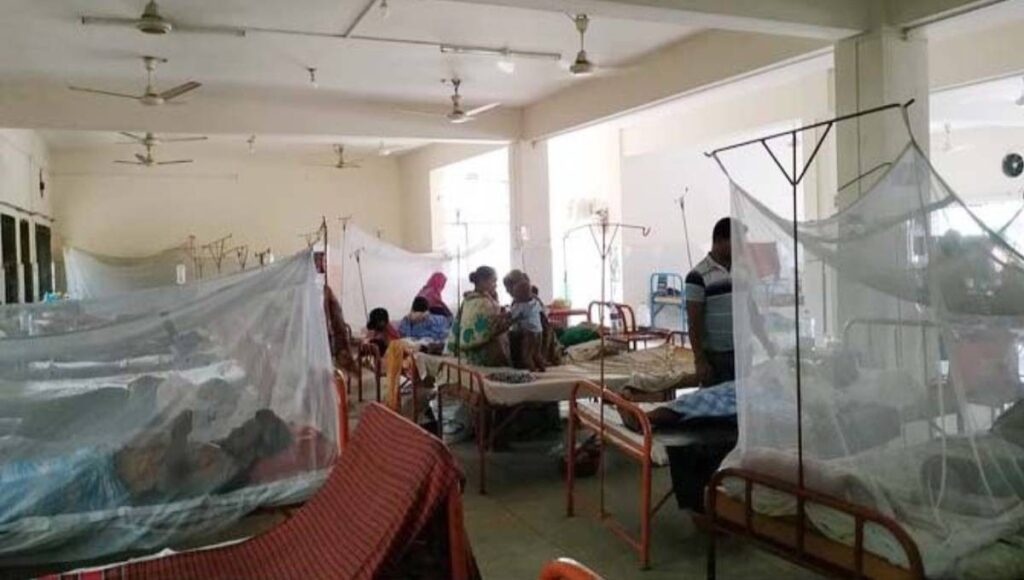 Dhaka, Aug 3 – Two people died of dengue and 1,649 new patients were admitted to different hospitals across the country in 24 on Saturday morning as the situation

remained alarming although the number of new cases was 38 less than Friday’s 1,687. A woman, Nadira Akter, 45, died in Madaripur early Saturday while undergoing treatment at Kalkini Health Complex.
Dr SM Khaliluzzaman, the acting Civil Surgeon, said Nadira, wife of Shawkat Mia of Krirhsnanagar village in the Upazila, was admitted to the hospital on Friday with dengue.
With this, four people died of dengue in the district since July 31.
One-and-half-year-old child Tawhid, hailing from Barguna, died of dengue at Sher-e-Bangla Medical College in Barishal on Friday evening.
The kid was first admitted to Sadar Hospital in Barguna with dengue fever on Tuesday and shifted to the Barishal hospital on Friday where he died, said Dr Md Sohrab Uddin, superintendent of Sadar Hospital.
Of the new patients, 969 were infected with the mosquito-borne virus fever in Dhaka alone with one of them suffering from dengue hemorrhagic and three others from dengue shock syndrome.
According to the Health Emergency Operations Center of the Directorate General of Health Services (DGHS), a total of 22,919 people were hospitalised with dengue since January 1.
Currently, 6,858 patients, including children, are undergoing treatment at hospitals while the rest were discharged after treatment.
During the period, 18 dengue patients died, all in the capital city, it said.
However, unofficial estimates suggest the death toll is much higher.
Hospitals in the capital have been struggling to provide an adequate place for the rising number of patients.
As the overpopulated Dhaka city is the centre of the dengue outbreak, Dhaka Metropolitan Police (DMP) on Saturday launched a cleanup campaign to rein in the spreading of the mosquito-borne disease dengue.
After inaugurating the campaign at Rajarbagh Police Lines, DMP Commissioner Asaduzzaman Mia said 50,000 police members will be involved in the drive covering all barracks, police station compounds and office units.
The government also cancelled the Eid vacation and weekly holidays of the officials and employees of the Local Government Division and two Dhaka city corporations until further notice.
Hundreds of people are being diagnosed with the viral disease and hospitalised every day across the country. Dhaka is at the centre of the outbreak, which is putting pressure on the already overwhelmed medical services.
Ruling Awami League has formed a central monitoring cell comprising of expert physicians to implement effective steps to control dengue and ensure an optimum medical treatment to those affected by the mosquito-borne disease.
Road Transport and Bridges Minister and Awami League general secretary Obaidul Quader on Saturday said all leaders and activists of the ruling party will remain in the field until the country becomes free of dengue outbreak.
Meanwhile, Jatiya Party Chairman GM Quader on Saturday slammed the government stating that it has utterly failed to tackle dengue.
BNP senior joint secretary general Ruhul Kabir Rizvi talking about the dengue outbreak alleged that the situation is gradually worsening due to the government’s failure to tackle it with effective measures.
He also said the government has no concern for people, no matter whether they die of dengue or they are washed away by the flood, as it was not elected with people’s votes.
According to reports reaching the UNB news desk, a number of people were infected with dengue in many districts.
In Manikganj, a total of 106 people have so far been detected with dengue, said sources at the Civil Surgeon office.
Of them, 34 were admitted to different hospitals from Friday morning till Saturday afternoon.
In Thakurgaon, a total of 22 people have so far been infected with dengue, said Civil Surgeon Anwarul Islam said.
Currently, 14 people are admitted to Sadar Hospital, he said.
In Pirojpur, the number of dengue patients is on the rise as 20 people were diagnosed with the fever in the last five days and 12 of them were referred to Barishal hospital and four were taking treatment in Sadar Hospital.
In Cumilla, a total of 143 people who were infected with dengue in the capital, are taking treatment at different hospitals. Of them, 136 were admitted to Sadar Hospital, said Dr Swapan Kumar Adhikari, Director of Cumilla Medical College Hospital.
In Natore, 10 dengue patients, including children, are currently admitted to Sadar Hospital, said its Resident Medial Officer Dr Mahbubur Rahman.
In Faridpur, 174 people have been infected with dengue till the date and 38 discharged after treatment.
Civil Surgeon Enamul Haque said 123 dengue patients are currently hospitalised in the district.
In Rangamati, seven people were found to be infected with dengue while one of them was sent to Chittagong Medical College Hospital and two were admitted to Sadar Hospital, said Civil Surgeon Dr Shahid Talukdar.
In Sylhet, 20 people, including women and children, were admitted to local hospitals in the past 24 hours till Saturday morning with dengue, said Deputy Civil Surgeon Dr Nur-e-Alam Shamim.
In Satkhira, 43 people were marked with dengue fever and 16 of them are still under treatment and 25 returned home after treatment and two others were referred to elsewhere.
Most of them were infected in the capital and returned home later, said the Civil Surgeon.
In Naogaon, until Saturday afternoon, 30 dengue patients were detected and 20 of them were admitted to Sadar Hospital and five were sent to Rajshahi Medical College Hospital.
In Sirajganj, 11 people were infected with dengue in the last 24 hours taking the total number to 56, said Civil Surgeon Dr Shahidul Islam.
In Tangail, a total of 90 people have so far been infected with the mosquito-borne fever and 30 of them were admitted to different hospitals in the past 24 hours.
In Brahmanbaria, the Civil Surgeon office said the total of dengue patients in the district is 50 till Saturday.
In Bhola, 26 people who went from the capital were spotted with dengue.
The first case of dengue infection was recorded in Kurigram on Saturday with a housewife getting infected in Phulbari Upazila. – UNB