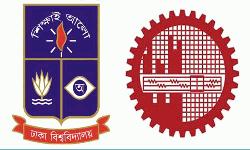 A final decision has been taken to organise the unified admission test for country’s public universities from the 2020-21 academic sessions as Dhaka University and BUET have reached an agreement in this regard.The decision was taken at a meeting of University Grants Commission (UGC) on Wednesday with its Chairman Prof Dr Kazi Shahidullah.
Vice Chancellors of 12 universities including of Dhaka University, Jahangirnagar University, Rajshahi University, Chittagong University Bangladesh University of Engineering and Technology, Bangladesh Agriculture University and UGC members were present in the meeting.
After the meeting, the UGC Chairman said, “We expect that works on admission test will start in full swing from March next. The UGC will extend its all-out cooperation to the universities.”
Separate committees will be formed with the university teachers for admission test, he said adding that admission system will be informed later, reports UNB.