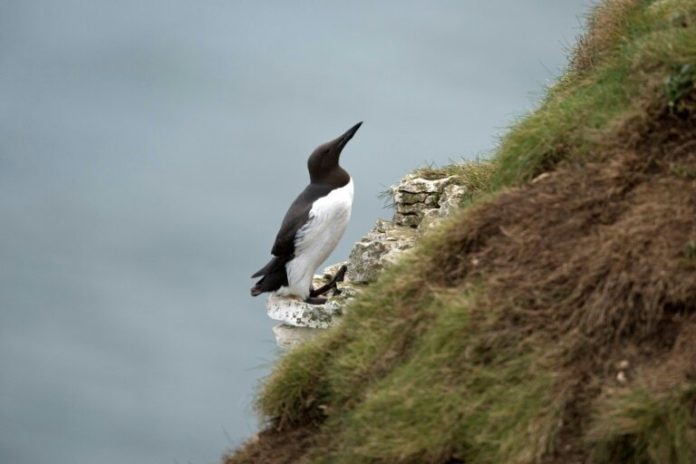 It was late on a stormy Saturday night when marine biologist Mardik Leopold’s phone rang at his home on the remote northern Dutch island of Texel.
On the line was a coast-watch volunteer calling to tell him of reports of hundreds of dead guillemots washing up along the country’s shores.
“The next morning, my phone rang red-hot from callers all over reporting dead birds,” Leopold, based at Wageningen University’s marine research department in the northern port city of Den Helder, told AFP.
“Alarm bells started ringing.”
Since early January, more than 20,000 dead guillemots have washed up dead on Dutch beaches — from the northern Wadden Islands to southwestern Zeeland.
“All the birds show signs of severe starvation and we don’t know why,” said Leopold.
On Thursday, Leopold, other marine biologists and veterinary pathologists will gather in the central city of Utrecht to perform a mass autopsy on some 100 birds, hoping to find an answer.
Scientists like Leopold say they are in the dark as to why this phenomenon has struck the North Sea’s guillemot population, which numbers about two million.
One possible cause being probed is a recent spill from a container ship, the Panama-registered MSC Zoe, in January.
The spill littered the Dutch and German coastlines with debris, including plastic toys, polystyrene, shoes and at least one bag with a dangerous powder identified by authorities as “organic peroxide”.
But there is no proof of a link and the container theory raises as many questions as it would answer.
Why, for example, are only guillemots dying all along the Dutch coastline? Leopold said he has received no similar reports from Belgium or Germany.
Also, guillemots are a cliff-breeding species who raise their chicks mostly along the rugged coasts of Scotland, Norway, Iceland and the German island of Heligoland, said Leopold.
“They are pretty robust birds,” he said, equipped with small wings which enable them to “fly” underwater as they chase fish like sprat and herring.
– ‘Something wrong at sea’ –
But now, dead birds are washing up “in their thousands”, Leopold said at a warehouse in Den Helder, where dozens of the dead birds are being kept on ice.
“That’s pointing out that there is something wrong at sea, and that’s alarming.”
Their mysterious deaths are turning marine biologists like Leopold into the equivalent of animal crime-scene investigators.
There are several theories circulating.
One is that rough weather caused the birds to become too tired to chase fish underwater, eventually causing them to starve.
But, said Leopold, “this winter was not particularly rough or severe and also, surely the birds would also have washed up elsewhere?”

As for the container theory, Leopold said an initial autopsy on a small number of birds showed “no plastic” in their stomachs.
Similarly, if the birds were affected by a chemical, other animals would also have shown symptoms, the marine biologist said.
Nor are the birds covered in oil or any other visible substance, which rules out an oil spill.
– ‘Very sick’ –
This is not the first time guillemots have died off in their thousands, said Leopold. There were similar events in the 1980s and 1990s.
While Leopold and other scientists are puzzling out the mysterious deaths, some 120 kilometres (80 miles) to the east, animal rescuers have been hard at work saving many weak guillemots still alive when they washed up.
“They arrive here very sick. They are in poor condition,” said Hetty Sinnema, manager at the Fugelhelling bird sanctuary in the small northern Frisian village of Ureterp.
By last Friday, the shelter had received 35 birds, but only around 14 have survived, despite emergency care and tube feeding with a special mix of fish, glucose and electrolytes.
Sinnema said she believed the bird deaths could be attributed to a combination of factors including rough seas and a shortage of fish.
“But we have to wait for the scientists to give us a clear answer,” she said.
Leopold said scientists hoped to publish a report within a month after the autopsy, reports AFP , Den Helder, Netherlands.