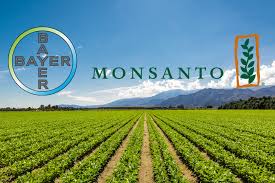 A new legal study by University College London urges the European Commission “to take action and to block the proposed merger between Bayer and Monsanto, whether viewed through a narrow competition lens or a wider scope of social and environmental costs”. The study sets out five main reasons why EU competition law requires that the merger be blocked. 1. High market concentration: If the Bayer-Monsanto merger is approved, just three corporations (ChemChina-Syngenta, DuPont-Dow and Bayer-Monsanto) will own and sell about 64% of the world’s pesticides/ herbicides, and 60% of the world’s patented seeds. Thus, the Bayer-Monsanto merger would occur in a market context of even weaker competition.
2. Entrenched market power: Bayer holds 206 patents and Monsanto 119 on transgenic plant traits in the EU, while Monsanto monopolises the US market with 96% of patented cotton traits. The risk of “anticompetitive collusion” is increased by the significant links the firms have, such as cross-licensing agreements, joint ventures, and other R&D strategic alliances.
3. Increased prices for farmers: The merger would “undoubtedly” raise costs and reduce the choice of seeds for farmers, with “considerable effects” on the viability of small