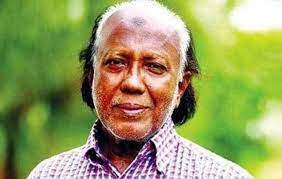 Dhaka, Apr 18 – SM Mohsin, a renowned theatre activist who was conferred the Ekushey Padak in 2020, died of Covid-19 on Sunday morning at BIRDEM General Hospital in the capital. He was 73. The actor’s son Rashek Mohsin told the media that his father breathed his last at 9:30 am.
He will be laid to eternal rest after Asr prayers at the Azimpur graveyard in the capital, according to Directors Guild president Salahuddin Lavlu.
Being tested positive for Covid-19 on April 5, SM Mohsin was admitted to Holy Family Red Crescent Medical College Hospital. He was then shifted to the Intensive Care Unit (ICU) of Impulse Hospital after his condition worsened.
Then he was taken to BIRDEM General Hospital, where he breathed his last on Sunday morning.
With a career spanning four decades, SM Mohsin cemented his legacy as a prolific persona in the arts and culture sphere of the country.
He was born in 1948 at Mirzapur, Tangail and completed his alma mater in Bangla and Journalism at Dhaka University. He later channeled his knowledge through becoming a faculty member of the Department of Drama and Dramatics at Jahangirnagar University.
In his esteemed administrative career, Mohsin also served as acting director-general of Bangladesh Shilpakala Academy and also the first project director of the National Theatre. He became an honorary fellow of the Bangla Academy in 2018.
As an actor, Mohsin acted in many notable theatre productions including Rokte Bheja Shapla, Munier Choudhury-directed play Kobor and Chithi, other plays namely Dipantar, Subachan Nirbasane, Chup Adalat Cholchhe and more. He was actively involved with the theatre troupe Drama Circle. He made his radio debut performing in a play named Padakshep.
Mohsin garnered mainstream popularity as a television actor with his performances in dramas including Mohor Ali, Sakin Sarisuri, Gorom Bhat Othoba Nichhok Bhuter Golpo, Nilambari and others.
He also acted in films namely Chitra Nodir Pare, Brihannala and others. He completed his last film shooting for the movie Antaratma on April 2, starring Shakib Khan and directed by Wazed Ali Sumon.
Besides winning the Ekushey Padak for his contributions in the cultural sector in 2020, SM Mohsin received Meril Prothom Alo Award for Best Television Actor (2007) and Shilpakala Padak (2017), to name a few. – UNB