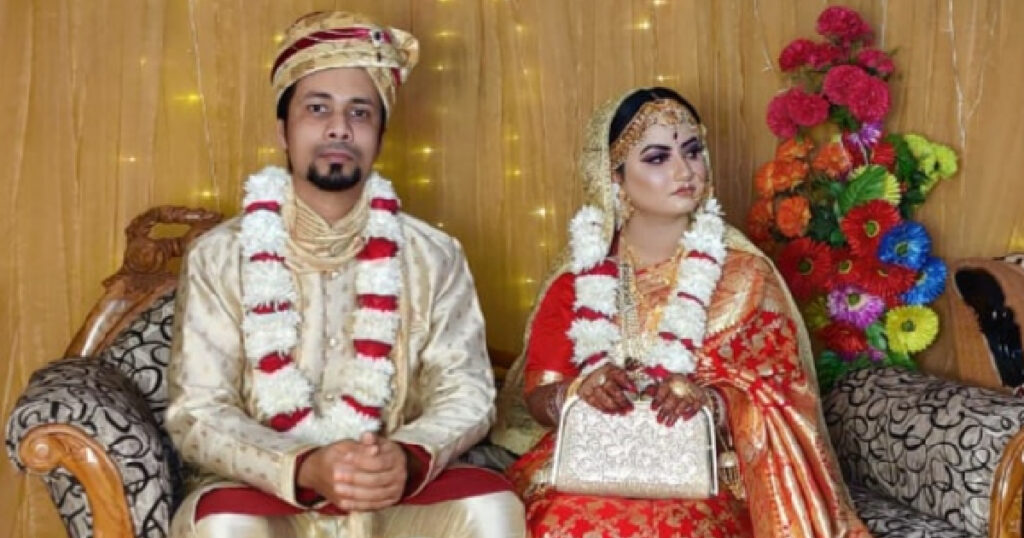 Faridpur, Jan 8 – ‘Den Mohr’, the dower money given by the bridegroom to the bride, has somewhat become a matter of showoff these days. But a wedding that people saw in Faridpur on Friday shattered the conventional perception.

The ‘Den Mohr’ was fixed at Tk 1 at the insistence of the bride and her family.
Bipasha Aziz, 25, the only daughter of Madaripur residents Azizul Haq and Nasrin Sultana, works at a private company in Dhaka. Her husband, Ashikuzzaman Chowdhury, 30, a resident of Faridpur, is a businessman.
Those who attended the unique marriage said the bride had decided on the token ‘Den Mohr’ since she is financially solvent. The Qazi, (marriage registrar) who administered the marriage, wrote Tk 200,000 as Mohr.
When Bipasha came to know about it, she and her mother informed the Qazi about their decision and changed the amount to Tk 1.
Faridpur Nagarik Committee President Awlad Hossain said the bride’s side usually forces the bridegroom to raise the Mohr.
“But this is an exception as a self-dependent woman exhibits her dignity,” he said.
However, Faridpur BlAST coordinator Shipra Goswami did not agree.
“Mohr is the right of a woman. It’s fixed after considering the financial condition of the bridegroom and the woman’s social standing,” she said.
Shipra said there is no place for emotion when it comes to fixing Mohr.
“One can go for a Tk 1 Den Mohr but it’s not practical,” she said. “Her financial condition might be good now but who knows about the future!”
Nevertheless, everyone appreciated the bold and unusual move and prayed for the well-being of the newly-wed couple. – UNB